Is most-fouled Swan a sitting duck at Anfield ?

Fantasy football game www.oulala.com have taken a comprehensive look at which players have provoked the most fouls in English football’s top flight this season. The top ten includes many of the usual suspects. However the Premier League’s most fouled player may surprise you.

Swansea City’s André Ayew leads the EPL as the most fouled player this season. The Swans forward has suffered 37 fouls, two more than any other player. Braking the numbers down, Ayew has been fouled at an average of 2.85 times per game, or once every 31 minutes.

Arsenal’s Alexis Sánchez and Sadio Mané of Southampton are joint second on Oulala’s list, both have suffered 35 fouls this term. 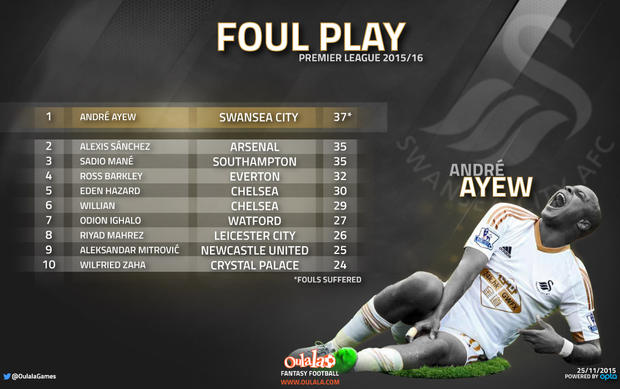 Another notable name on Oulala’s list is Leicester City’s Riyad Mahrez. The midfielder is having an outstanding season and is the eighth most fouled player, suffering 26 fouls (2.17 per game). Alongside Sánchez and Hazard, the Algerian has completed the equal most successful dribbles in the Premier League, a total of 44 successful take ons.

This weekend Swansea face Liverpool, a side André Ayew has recently been linked to. The Premier League’s dirtiest player, Lucas Leiva (30 fouls committed), is suspended for the game after picking up his fifth yellow card against Manchester City. Welcome news for the Premier League’s most fouled player.

It’s all happening at FanTeam! »