Feisty Cockerels to feast on Blues

This weekend’s London derby between Tottenham and Chelsea promises to be an electric clash, as the most fouled team takes on the side that has committed the most fouls.

Fantasy Football game www.oulala.com have taken a look at the top five clubs that have committed and suffered the most fouls this season, revealing some interesting results.

As if he needed another excuse to complain, Chelsea manager Jose Mourinho can claim that his club have suffered the most fouls this season with a total of 176. In fact Chelsea are well ahead of the pack having had 11 more fouls committed against them than second placed Arsenal with 165.

On the other hand, Tottenham are guilty of committing the most fouls with a total of 184. That’s an average of 14.2 fouls per game. The main culprits are Erik Lamela (24), Delli Alli (23) and Eric Dier, also with 23. Oulala’s stats show that the three are responsible for 38 per cent of Tottenham’s fouls. Eden Hazard has suffered the most fouls for Chelsea with 30. That’s an average of 2.3 fouls received per game. He is followed closely behind by fellow teammate Willian with 29. 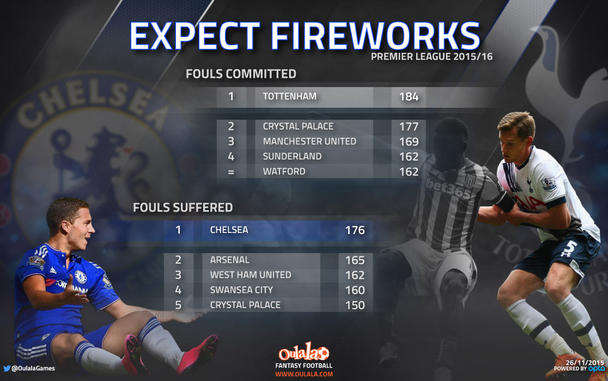 Elsewhere Swansea City have the fourth highest amount of fouls committed against them with a total of 160. Of those 160, Swansea striker Andre Ayew has suffered 37, the highest in the Premier League. Liverpool do not feature oneither list but no doubt the Ghanaian International will be glad that Lucas Leiva is suspended for their clash at the weekend. Lucas is the player that has committed the most fouls in the EPL with 30 and is serving a one match suspension for accumulating five yellow cards.

« It’s all happening at FanTeam!

Some things are guaranteed! »