After their 4-1 thumping at the hands of Liverpool at the weekend, Frank Lampard commented on City’s over reliance on key players such as Vincent Kompany and David Silva.

Fantasy Football game www.oulala.com have taken a look at just how pivotal the duo are for the team.

In regards to their humiliating defeat at home to Liverpool, Lampard stated on Sky Sports that City are “missing their captain, (Vincent Kompany) and that became apparent very quickly”.  Last weekend’s defeat was the first time since 2003 that City had conceded four goals at home.  So far this season Manchester City have conceded 13 goals in 13 Premier League games. However, incredibly, the Blues have only conceded one goal in the eight games that Kompany has featured in. In those eight games City have a 75 per cent win-rate. In the remaining five games the Blues only have a 40 per cent win-rate. Kompany has an 88 per cent success rate in aerial duels, winning 17 out of 21. The Belgium international has accumulated a total of 44 clearances and 13 interceptions. As well as performing his defensive duties, Kompany has also found the back of the net twice. Both goals came in the opening two games of the season in the 3-0 victories against West Brom and Chelsea. 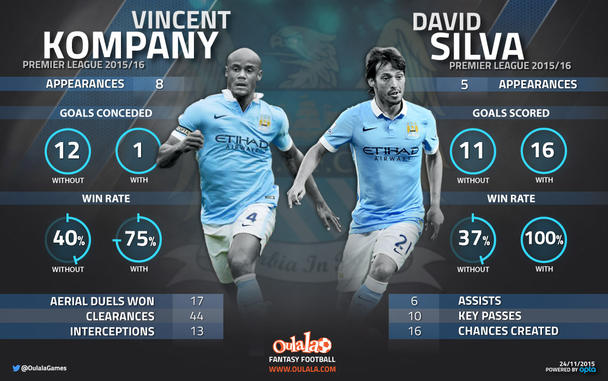 On the other hand, Lampard has also described David Silva as “massive” for City. Indeed Oulala’s stats show that the 29-year-old Spaniard is sorely missed by the Blues. Silva has only played five EPL matches this season but has a 100 per cent win-rate. In those five matches City have scored an incredible 16 of their 27 goals. This means that the Blues have found the back of the net just 11 times in the eight matches that Silva has been absent. When one looks at his stats it is easy to understand why. Silva has the second highest amount of assists in the Premier League and third highest in Europe. In the EPL he is pipped to the post by Mesut Ozil with 11 assists. However, Ozil has had a lot more game time with 12 appearances in 13 matches compared to Silva’s five in 13. With 10 key passes, overall Silva has created 16 chances for the Blues.

All of City’s three Premier League defeats this season have come in games that Kompany and Silva have not played in. Astonishingly, Oulala’s stats show that in those three defeats City have conceded 10 of their 13 goals and scored just four.

City’s next match is a Champions League clash away to Juventus on Wednesday night. The Blues currently lie top of group D with nine points from four games. However, with the Bianconeri lying just behind with eight points, the match could prove vital as to who finishes top of group D. Kompany and Silva are still not fully fit and will not feature. They will also have to do without the services of Wilfred Bony although Aguero should start after playing 66 minutes against Liverpool. After Juventus, City’s next premier league match lies at home to Southampton this weekend. With just one win in four EPL matches Pellegrini and City fans alike will no doubt be hoping for Silva and Kompany to return sooner rather than later.

Is most-fouled Swan a sitting duck at Anfield ? »