Jamie Vardy now leads the Premier League goal scoring charts after netting his fifth and sixth goals of the season in Leicester’s 5-2 defeat to Arsenal on Saturday, despite playing with a broken wrist.

After just seven games this season, the 28-year-old has already surpassed his tally of five goals in the Premier League last term. He now sits above some of Europe’s top forwards after the opening two months of the season.

Fantasy Football game www.oulala.com have taken a closer look at Vardy against four strikers that scored 129 league goals between them last season. Cristiano Ronaldo, Lionel Messi, Neymar and Luis Suarez, and the numbers are incredible.

Vardy has scored one more league goal than Ronaldo and three more than each of Barcelona trio, Messi, Neymar and Suarez. 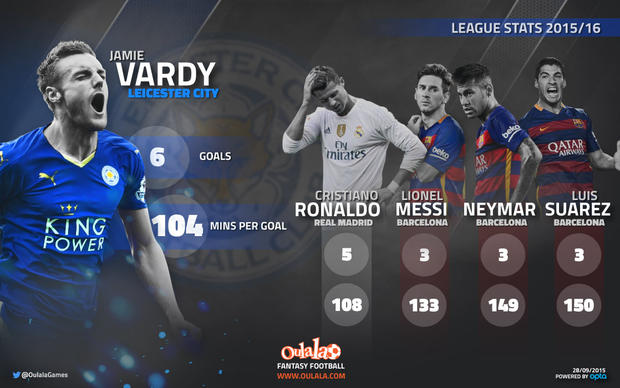 But what’s more impressive is the rate in which the Leicester forward is scoring his league goals this season compared to arguably, Europe’s top four strikers.

It has taken Vardy an average of just 104 minutes to score each of his 6 goals. In contrast, Ronaldo has taken 108 minutes, Messi 133 minutes, Neymar 149 minutes and Suarez 150 minutes.

With two more Euro 2016 qualifiers approaching against Estonia and Lithuania in the coming weeks, Vardy is the stand-out English forward in the Premier League on current form.

Battle of the ‘Wonder Boys’ »