Battle of the ‘Wonder Boys’

Arsenal’s Alexis Sanchez began the Premier League season slow. The Copa America success that he enjoyed with Chile during the summer appeared to have taken its toll early on. However, with a hat-trick against Leicester in the league last weekend and a goal and assist in the Champions League on Tuesday, the 26-year-old now appears back to his typical best.

Anthony Martial’s first taste of English football has begun with a bang at Manchester United after scoring three goals in his opening three games in the Premier League following his £36 million move from AS Monaco.

Fantasy football game www.oulala.com have analysed the attacking numbers from both players on a per minute basis in the Premier League this season for what is expected to be an epic battle.

Despite playing fewer minutes than the Chilean, Martial leads his opponent in four key areas. 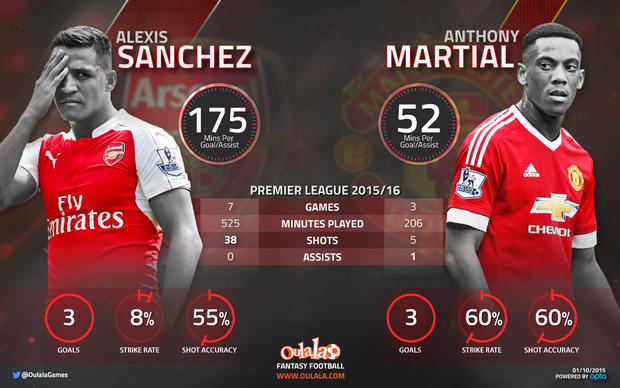 The 19-year-old has produced a goal or an assist every 52 minutes in his opening three games, compared to the 175 minutes that it has taken Sanchez to do the same in his seven games after experiencing a sluggish start.

With 3 goals from just 5 shots, the Frenchman’s strike-rate sits at an impressive 60%. Alexis Sanchez’s 38 shots are the most from any Premier League player so far this season, resulting in a disappointing strike-rate of just 8% by the 26-year-old.

Martial also leads Sanchez for shot accuracy with 60% attempts on target to 55% from the Arsenal player.

Can the Manchester United teenager continue his terrific form for his new club or is a visit to Arsenal and a battle with a now revitalized Alexis Sanchez just one step too far?

A Cross to Bear »