Griezmannia – is it time to invest in a Manchester hair salon?

While Manchester United went a second successive game without scoring against Everton at the weekend, a 24-year-old Frenchman was busy netting his twenty-first and twenty-second league goals of the season.

Antoine Griezmann is now Spanish football’s third top goal scorer behind only Cristiano Ronaldo and Lionel Messi in his first season at Atlético Madrid. He also sits fourth overall in Europe. Only Lionel Messi (21) has scored more league goals in 2015 than Griezmann (16).

Losing a striker of Diego Costa’s caliber would hurt most clubs, but Atlético Madrid aren’t most clubs. The Spanish side have a knack of replacing quality with quality when it comes to forwards. Sergio Agüero replaced Fernando Torres, Radamel Falcao took over Agüero, Diego Costa followed Falcao. The conveyor-belt of top quality strikers has seemingly continued with Griezmann’s emergence.

It is no secret that Manchester United manager Louis van Gaal has made a striker his number one priority this summer. Radamel Falcao is likely to return to Monaco after an unsuccessful loan spell while Robin van Persie continues to struggle with injuries.

Rumours have recently circulated that Antoine Griezmann is on the Dutchman’s radar. Opta-powered fantasy football game www.oulala.com decided to take a closer look at the 24-year-old, putting him up against the man he replaced at Atlético, Diego Costa. 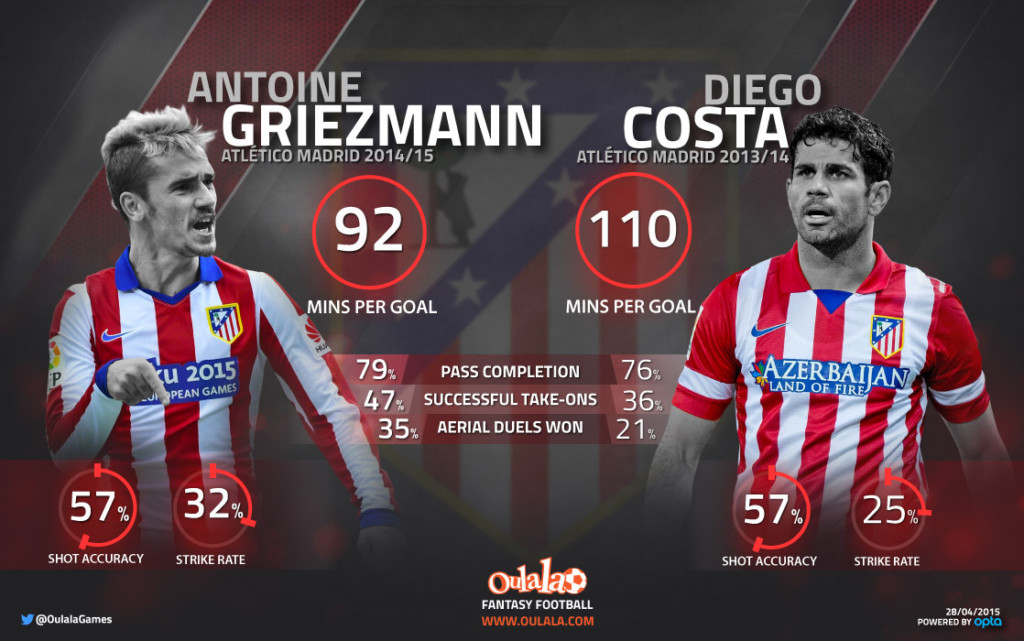 The Frenchman’s stats are to be admired. It has taken Griezmann just 92 minutes to score each of his 22 La Liga goals this season. In contrast, Costa took 110 minutes to score each of his 27 from last season. Additionally, every Griezmann goal has come from open play compared to Costa who netted five penalties for Atlético last season, a further tilt in the minutes per goal ratio balance in Griezmann’s favour.

The pair share the same shot accuracy of 57%. However, with fewer shots Griezmann has the better strike-rate of 32% to Costa’s 25%.

After seeing what Diego Costa has achieved in his debut Premier League season, the numbers suggest that Griezmann could match the Spaniard, or dare we say it, better him. Looking at the numbers it is no surprise that the Frenchman is a wanted man.

Louis van Gaal must do all it takes to secure the 24-year-old’s services in his push for the Premier League title next season. Griezmann would be a big statement of intention should the Dutchman succeed in bringing him to Old Trafford.

Jack of Trumps – the sleeper in the pack »