In recent weeks Francis Coquelin nullified the threat of Philippe Coutinho and Raheem Sterling. He then stopped Angel Di Maria and Ander Herrera. The Arsenal midfielder now faces his biggest challenge of the season so far as Eden Hazard and Cesc Fabregas prepare to visit the Emirate’s on Sunday.

The 23-year-old’s reputation has continued to grow since his return from Charlton on loan. Comparisons to Chelsea’s own defensive midfield unit Nemanja Matic, who Coquelin recently praised, have flooded the headlines and now the Frenchman faces his biggest test to date to truly justify the praise aimed towards him this season.

Opta-powered fantasy football game www.oulala.com analysed Coquelin’s Premier League performances since the turn of the year to see how he has fared in six key areas. 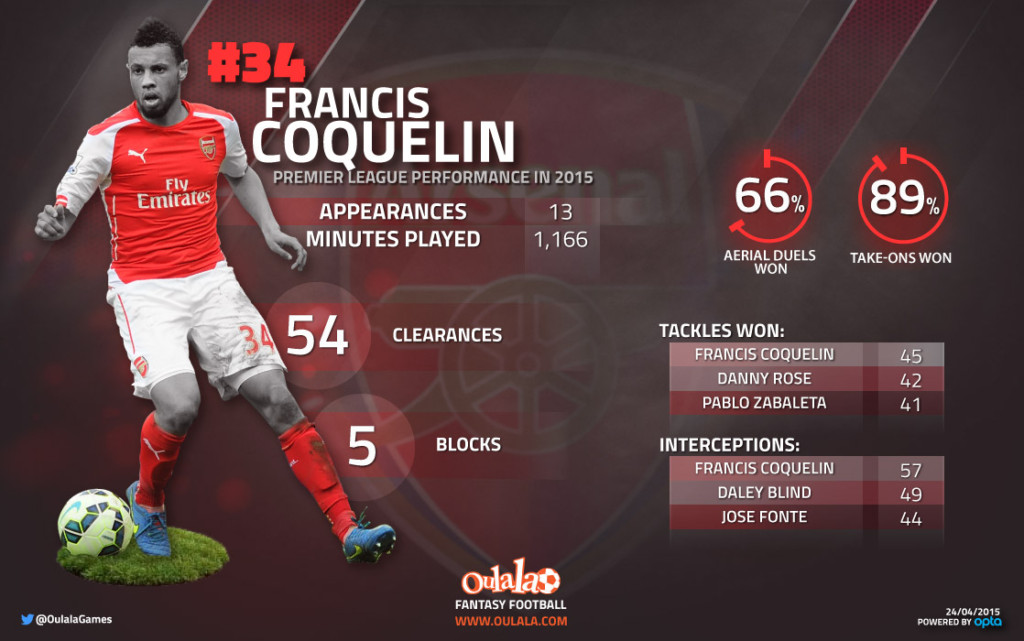 Manager Arsene Wenger has started the 23-year-old in all thirteen league games in 2015 with the Frenchman clocking up an impressive 1,166 minutes of football.

Looking at the stats, Coquelin is simply in a league of his own. He leads every single player for tackles won (45) and interceptions (57) in 2015. The Frenchman has also made an impressive 54 clearances and 5 blocks in that time.

As far as duels go, Coquelin’s dominance continues. Winning an excellent 89% of his take-ons and 66% of his aerial duels, the midfielder’s work-rate and influence to Arsenal’s recent upsurge in form is unquestionable.

It appears that Arsene Wenger has finally found the missing cog to his Arsenal side ever since Partrick Vieira’s departure. Arsenal’s attacking threat has never been in doubt. If Coquelin can stop the threat that Hazard and Fabregas pose then maybe, just maybe Arsene Wenger can finally get one over his nemesis – Jose Mourinho.