Arsenal midfielder Francis Coquelin enjoyed an excellent breakthrough campaign last term. Had Arsene Wenger finally found the midfield jigsaw piece that he had been missing since the departure of captain Patrick Vieira in 2005?

On Sunday, the Frenchman was substituted in the sixty-fourth minute at Crystal Palace, a decision based on the yellow card that Coquelin had picked up in the forty-first minute after a foul on Wilfried Zaha. Subsequent fouls from Coquelin forced Wenger’s hand as he removed the midfielder in anticipation that a red card was about to follow.

Ultimately, the acid test for Coquelin is whether he can build on last season’s success. The early signs are good.

Stats released by Opta-powered fantasy football game www.oulala.com show that the 24-year-old has improved on last season’s impressive form. On a per 90 minute basis, the Frenchman is up in a host of key areas from last season. 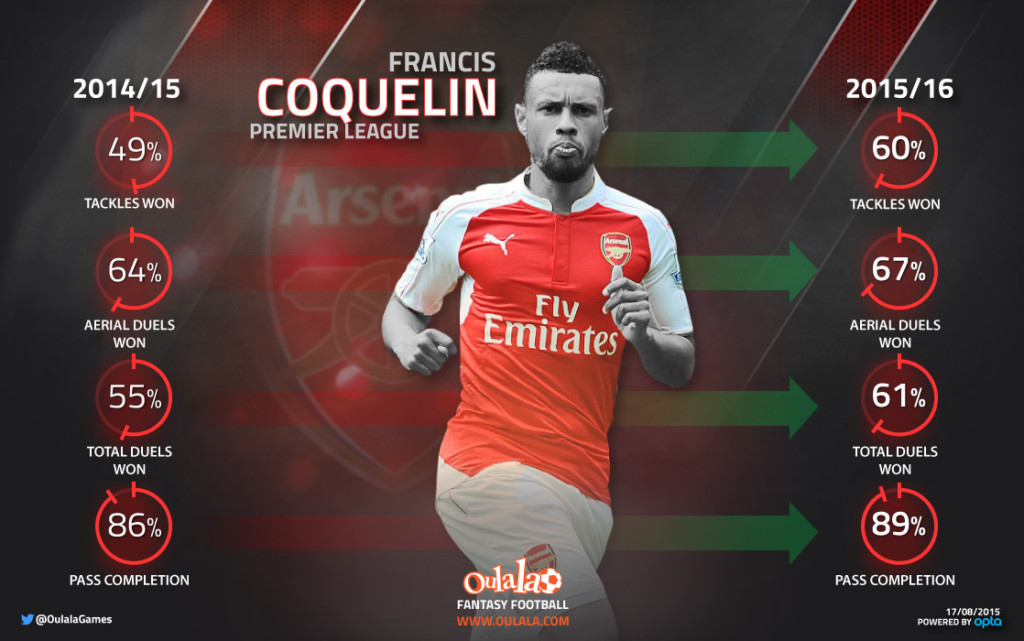 The 24-year-old’s success in the air is also up. He has won 67% of his aerial battles compared to 64% last term. Total duels, again are on the rise. Coquelin has won 61% of all his head-to-head battles, 6% up from last season.

While the likes of Alexis Sanchez and Mesut Ozil steal the headlines, one man is showing all the signs of star billing.

If Francis Coquelin can continue to improve on an excellent 2014/15, Arsenal will undoubtedly be one step closer to challenging for the Premier League title this season.