It’s that time of the year, the season is now over and it’s transfer speculation that fills the back pages. One rumour that has caught the attention of many is Barcelona’s reported interest in Arsenal midfielder Aaron Ramsey.

Opta-powered fantasy football game www.oulala.com have taken a look at the Welshman’s performance data from the Premier League last season and compared it against the man he’d most likely be looking to oust in the Barcelona first team, Ivan Rakitic.

The Croatian has enjoyed an excellent debut season at Barcelona, bedding in with ease and the 27-year-old has some impressive stats to back it up. While Ramsey has followed up his excellent 2013/14 season with yet another fine campaign.

So how do the two compare? 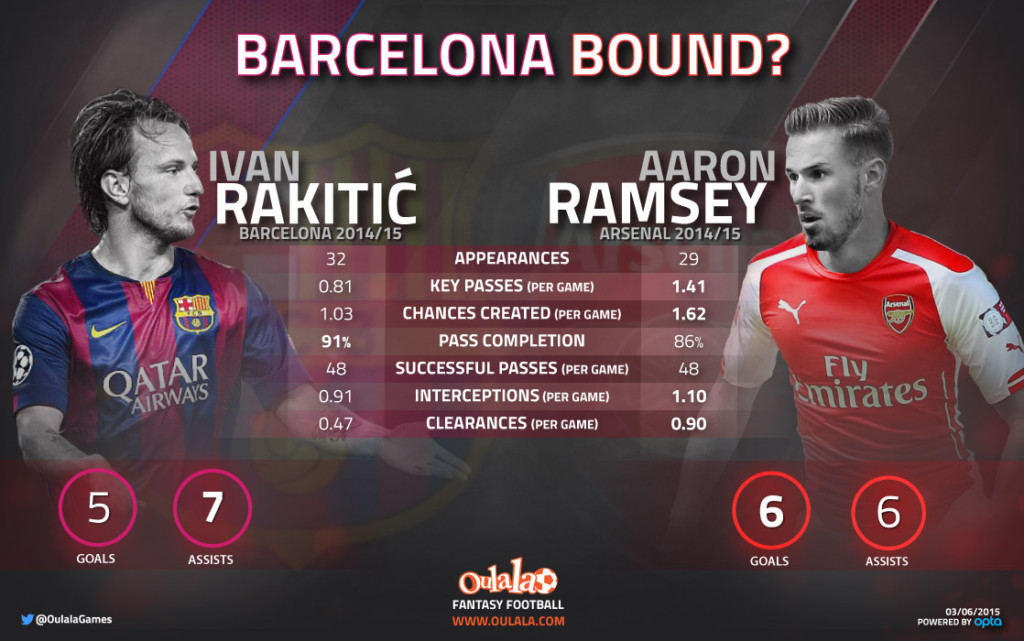 While Rakitic shades pass completion (91% to 86%), the pair have successfully completed exactly the same number of passes on average per game this season (48).

Ramsey has clearly been the more creative. The 24-year-old has created more chances (1.62 to 1.03) and supplied more key passes (1.41 to 0.81) per game. Although the Croatian’s team mates have been the more clinical, converting Rakitic’s supply into 7 assists compared to Ramsey’s 6.

The Welshman has scored one more goal than Rakitic (6 to 5) this season despite playing 3 games fewer. Ramsey has also shown to be the more defensively astute, making more interceptions (1.10 to 0.91) and more clearances (0.90 to 0.47) per game.

Suggestions that Barcelona sent club representatives to watch the Welsh international ten times last season, and with the stats to support the Spanish club’s continued interest in the midfielder, this rumour doesn’t seen to be one that will likely go away. When Barcelona want something, or somebody, they usually get them.