Who makes the Champions League Dreamteam?

In the build up to Saturday’s Champions League final, stats released by European fantasy football game www.oulala.com have revealed the best combined XI from Juventus and Barcelona based on player performance data from this season’s competition, provided by their partners Opta – and it’s scarily good! 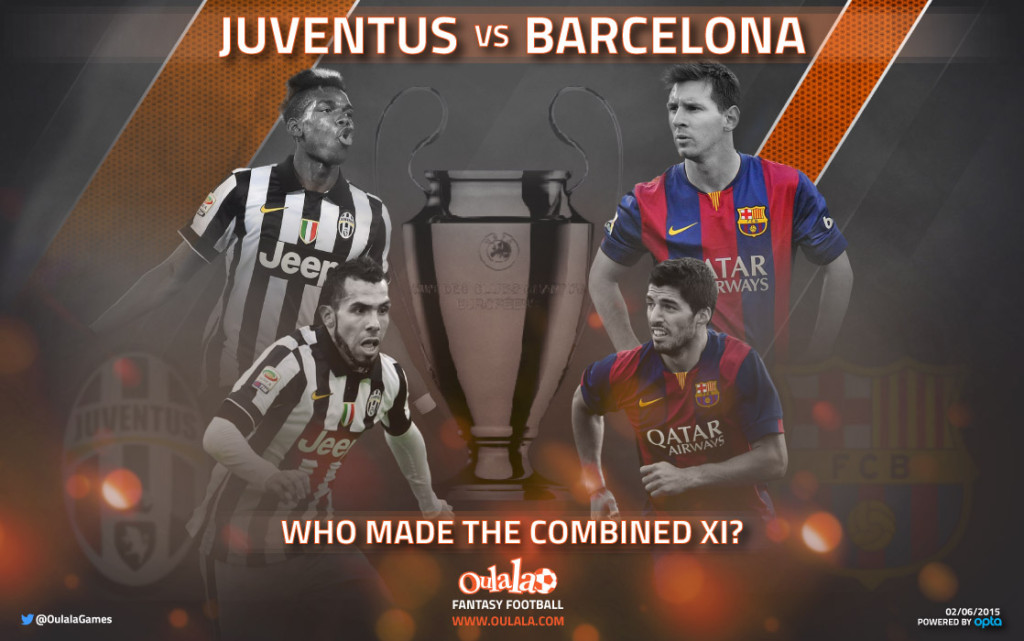 Juventus shot-stopper Gianluigi Buffon beats Marc-Andre ter Stegen comfortably to the number one jersey. The keepers have both kept 6 clean sheets in the Champions League this season. However, the Italian has conceded fewer goals (7 to 10), made more saves per game (2.3 to 1.8), more saves per goal (3.29 to 2) and has claimed more catches per game than the German (2.5 to 1.75).

Spanish international Jordi Alba takes the left-back spot over Patrice Evra. The Frenchman may have won a higher percentage of take-ons than Alba in the Champions League this season (71% to 69%) but that’s where the buck stops. Alba has won a higher percentage of tackles (53% to 50%), made more blocks (0.5 to 0.44) and interceptions (2.2 to 1.22) per game and has also created more chances per game too (0.9 to 0.89).

Two of the best defenders in world football clash for the first centre-back spot but Leonardo Bonucci has outperformed Gerard Pique in Europe this season with ease. The Barcelona man has made more blocks per game than his opponent (0.7 to 0.42) but Bonucci takes the remaining plaudits. The Italian has won a higher percentage of tackles (54% to 39%), won more duels (51% to 47%) and has made more interceptions (2.08 to 1.7) and more clearances (6.5 to 5.9) per game than the Spaniard.

The battle at right-back is a close one but Barcelona’s Dani Alves shades it from Stephan Lichtsteiner. The Juve full-back has won a higher percentage of tackles (46% to 39%) and made more blocks per game (0.17 to 0.1). Whereas Alves has won a higher percentage of take-ons (52% to 40%), created more chances per game (1.6 to 0.58) and has made more interceptions per game (1.8 to 0.83) in the Champions League this season. 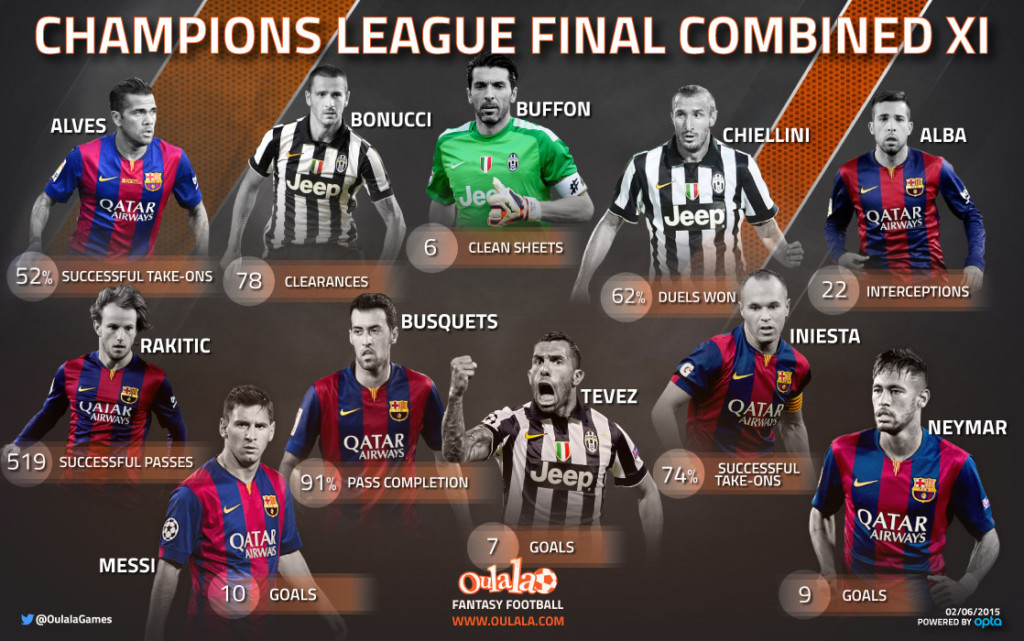 Two heavyweights battle in the form of Andrea Pirlo and Sergio Busquets but it’s not as close as you’d expect for the deep midfield role. Pirlo may have created more chances per game (1.22 to 0.11) but Busquets has led the way in every other key area in Europe this term. The Spaniard has a better pass completion (91% to 85%), has won more duels (52% to 41%), has won a higher percentage of tackles (53% to 35%) and has made more interceptions per game (2.56 to 1.33).

Two more world-beaters vie for the same spot as Andres Iniesta shows Paul Pogba that he has a long way to go to be considered in the same class as the Spanish legend. Iniesta has excelled in every key area in the Champions League this season with a better pass completion (90% to 85%), more successful passes per game (52 to 36), a higher percentage of successful take-ons (74% to 44%), more chances created per game (1.2 to 1) and more key passes per game (0.8 to 0.67).

The second midfield spot sees Ivan Rakitic get the better of Claudio Marchisio. The players share exactly the same figures for chances created (0.82) and key passes (0.73) per game but Rakitic has taken the other key stats in the Champions League this term. The Croatian has the better pass completion (89% to 83%), more successful passes per game (47 to 40) and also has a better success rate when it comes to take-ons (53% to 50%).

Due to the slight difference in systems that Juventus and Barcelona deploy this may seem an odd match up but on the surface the fairest due to the other battles around them. Arturo Vidal puts up a good fight but loses out to Neymar. The pair share the same pass completion (83%) and Vidal has the better record for take-ons (57% to 46%) but Neymar has excelled in every other key area in Europe this season. The Brazilian betters Vidal for chances created per game (1.82 to 1.27), goals scored (9 to 1) and shot accuracy (74% to 47%).

Alvaro Morata is unlucky to come up against Lionel Messi. The Spaniard does well to better the Argentine for shot accuracy in this season’s competition (60% to 56%) but it’s no surprise that Messi blows Morata out of the water elsewhere. Messi leads Morata for pass completion (86% to 71%), successful take-ons (65% to 54%), chances created per game (2.92 to 0.73) and goals scored (10 to 4).

Luis Suarez has enjoyed an excellent debut season for Barcelona but he misses out to Carlos Tevez for the centre-forward spot. The Uruguayan has matched the Argentine for shot accuracy (62%) in the Champions League this season but Tevez has excelled elsewhere. The Juve forward has enjoyed a better pass completion (84% to 74%), successfully completed more take-ons attempted (68% to 65%), created more chances per game (2.33 to 0.89) and scored more goals (7 to 6).