After an initial promising start to the season by scoring on his debut, as with many of his compatriots this season, Chelsea player Pedro has fallen into anonymity.

Stats compiled by fantasy football game www.oulala.com have revealed the top 10 Premier League strikers with the lowest shot accuracy, of all forwards that have attempted 10 or more shots this season.

With a lowly 21 per cent accuracy from 20 shots, Pedro has the unwanted title of ranking number one in terms of strikers with the poorest shots on target.

Despite not yet reaching the halfway mark of the season, Spanish media reports that the summer signing from Barcelona is reportedly unhappy with life at Stamford Bridge. Pedro has so far scored once in eight appearances for the Blues. Having only recently returned from injury, he played 69 minutes in Chelsea’s last Premier League defeat against Stoke City.

A perhaps more surprising inclusion is that of Southampton star Graziano Pelle who ranks at number 5 on Oulala’s list. Since joining in 2014, the 30-year-old Italian has been a key figure for the Saints. So far this season he has found the back of the net six times in 12 matches, an average of a goal every two games. However, from 45 shots the veteran striker has only a 32 per cent accuracy. If he were to improve on his shooting he could be looking at a better goal ratio/return closer to that of Jamie Vardy with 12 goals from 48 shots. 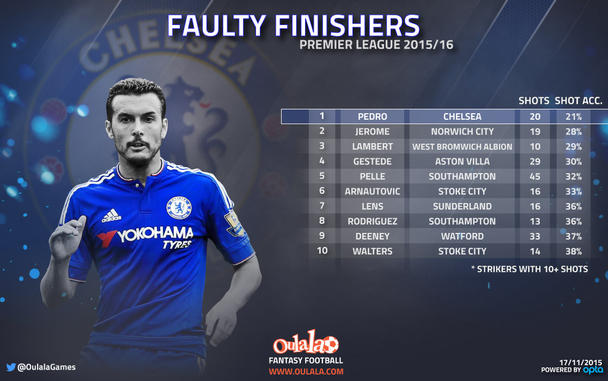 Another Southampton player to make the list is Jay Rodriguez. The 26-year-old Englishman was out injured for 16 months but returned for the start of the season. After coming back from such a long injury spell Rodriguez was understandably still finding his feet with a 36 per cent shot accuracy from just 13 shots. Despite finding the back of the net in a Europa League match, Rodriguez has yet to find a goal in the EPL this term. Rodriguez suffered yet another injury setback after suffering from severe foot pain and has not featured in the Saints’ last three Premier League matches. However Southampton manager Ronald Koeman is hoping Rodriguez, along with Shane Long, will be fit for their clash against Stoke City this coming weekend.

Meanwhile Oulala’s stats have Rickie Lambert of West Brom number three on the list with a 28 per cent accuracy from 19 shots. Since leaving the Saints to join his boyhood club Liverpool in 2014, Lambert has never regained the prolific goal scoring form that he once had. In two EPL seasons for the Saints the Englishman scored 28 times. So far this season he has scored once in 10 appearances for West Brom. At 33 years of age no doubt the Englishman recognizes that his glory days are behind him. Nevertheless he will be hoping to improve his shot accuracy and goal count before times runs out.

Is burnt-out Alexis losing his touch ? »