Vicente del Bosque certainly knows how to bring a player back down to earth. Just a few days after Isco had featured for Real Madrid  in their Champions League victory over an Atlético Madrid side that included the impressive Saúl Ñíguez, both players were among those not to make the final cut as the Spanish squad was trimmed down to 23 players. The 2012 champions, who defeated Italy 4-0 in the final in Kiev have a trappy-looking group to negotiate that contains Turkey, Croatia and the Czech Republic and there is certainly a stale look about the Spanish holders.

Del Bosque may well go with his favoured 4-3-3 but he has deployed a false 9 on numerous occasions in the past so don’t rule out that possibility, especially if his selected forwards struggle to fire early in the tournament. La Roja are unlikely to change the way they play – possession football will be the order of the day and he is likely to rely on a core group of players that have served him so well in the past.

David de Gea was voted Manchester United’s player of the year for the third time and is clearly the pick of their available shot-stoppers. His penalty kick-save from Romelu Lukaku in the FA Cup semi-final was top drawer and arguably his personal highlight.

He recorded a plethora of clean sheets throughout the season, so, when you factor in that Spain secured a shut-out in 8 successive qualifying games it does make him an attractive proposition for fantasy football managers.

On a cautionary note, though, del Bosque does show tremendous loyalty towards certain players and Iker Casillas is one of them.

The Spanish defence will have a familiar feel to it with Gerard Piqué, Sergio Ramos and Jordi Alba all expected to start. An injury to Dani Carvajal, who misses the tournament, means that Juanfran should occupy the right-back berth. One thing Spain genuinely lack is width and the full-backs will be expected to provide it.

Sergio Busquets and Andrés Iniesta look certainties to be included with Cesc Fàbregas or Thiago Alcântara filling the other position.

David Silva is likely to be deployed further forward, as is, Koke, who notched up 5 goals and 14 assists in La Liga during the 2015/16 season.

Nolito has smashed in 4 goals in 2 games to give himself a great chance of leading the line while Juventus forward Álvaro Borja Morata also has strong claims. However, Aritz Aduriz fired in 20 La Liga goals for Athletic Bilboa who narrowly missed out on a Champions League spot and he may be flanked by Silva and Koke.

Lucas Vázquez was something of a surprise inclusion and could feature up top or on the right wing.

The aforementioned Vázquez would be an interesting option and he could provide such much needed width, which may be needed if Spain’s tiki-taka approach fails to break down defences. 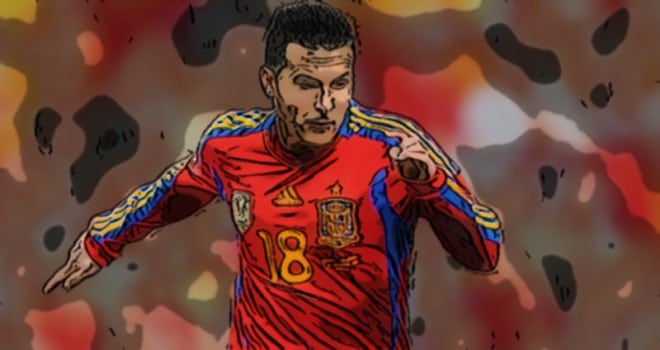 Pedro was also included in the squad and he’s another that remains a firm Vicente del Bosque favourite.

Much will depend on who starts up front. Possession of the jersey will be vital but Morata could be a good impact sub if he’s not selected from the off.

The Spanish team often  deploy short-corner routines, much like champions Barcelona. However, in Koke, they do have a real set-piece specialist  who is even capable of scoring direct from a corner-kick.

If Spain do decide do decide to go long Ramos and Piqué will offer an aerial threat with Silva and Fabregas among the potential takers.

Spain tend to share penalty kick-taking responsibility around but Iniesta and Fabregas have the seniority within the squad, making them the most likely options.