Tottenham Hotspur and Arsenal both suffered shock midweek defeats ahead of the North London derby at White Hart Lane. Arsene Wenger will be desperate for a reaction from his players as they attempt to avoid suffering a fourth consecutive loss, at this critical stage of the season. Anything could happen as the twists and turns just keep on coming, in arguably the most unpredictable of Premier League campaigns ever witnessed.

However, it’s not just at the top of the table where things are beginning to heat up. The relegation dogfight is starting to take shape and it doesn’t make pleasant viewing for the two North-East giants. The Swans shock win at the Emirates has opened up a bit of a cushion, meaning that both Sunderland and Newcastle United now trail Swansea City by 6 points.

Sunderland face a daunting trip to St Mary’s but there are two 6-pointers that could have a huge bearing on which teams survive. Swansea City have the chance to put another nail into the Canaries coffin when they entertain Norwich City at the Liberty Stadium, while Newcastle United will entertain the Cherries at St  James Park.

Elsewhere, goals should be in abundance at the Etihad when Manchester City, who are now only level on points with Manchester United, welcome rock-bottom Aston Villa. Expect to see plenty of fantasy managers stacking their sides with City players this weekend in anticipation of a big winning margin. 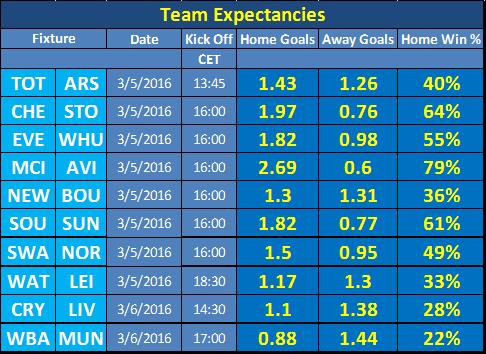 In-form Chelsea might have one eye on the Champions League return leg with Paris Saint Germain so it will be interesting to see what sort of line-up they pit out against Stoke City.

Manchester United and Liverpool are both in acion on Sunday and could easily come unstuck, in what promise to be physical encounters at West Bromwich Albion and Crystal Palace respectively. The Eagles, with an in-form Connor Wickham who is valued at 8.7M on Fanaments leading the line, have caused Liverpool plenty of problems in the past and with that Europa League tie on the horizon, it’s a distraction Jürgen Klopp’s men could do without.