Recent weeks have seen Chelsea nick a 1-0 home win against Manchester United despite only having 30% possession, nullify Arsenal at the Emirates in a far from memorable 0-0 draw and then secure the Premier League title thanks to a narrow 1-0 win over Crystal Palace at Stamford Bridge.

The ‘boring Chelsea’ jibes then began to surface after three important results, albeit results that lacked goals.

Opta-powered fantasy football game www.oulala.com took to the task of tallying up the total goals scored by every Premier League club in all competitions to see if the accusations of Chelsea being a boring side were fully justified. 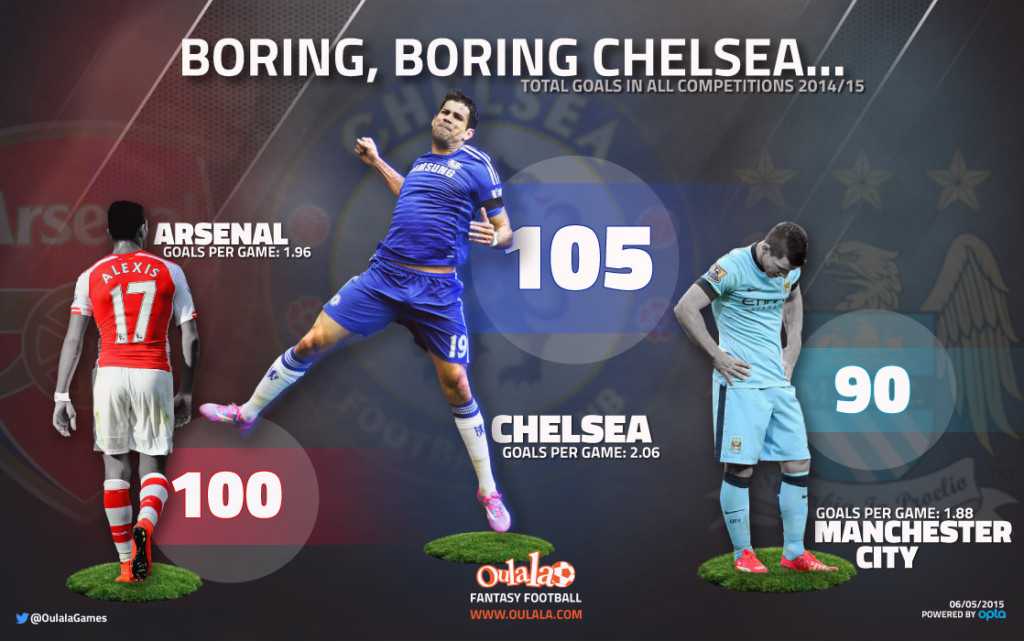 In 51 games in all competitions this season, Chelsea have notched up a total of 105 goals at a rate of 2.06 goals per game. The most goals and the best per game ratio of any team from the Premier League.

Arsenal are the only other side to reach three figures (100), at a rate of 1.96 goals per game from 51 games this season, which includes the Champions League qualifying play-offs and Community Shield.

Manuel Pellegrini’s Manchester City complete the top three with a total of 90 goals from 48 games at a rate of 1.88 goals per game.

Casting the net further, Chelsea are in-fact joint fifth top scorers in Europe alongside Sevilla of Spain. Only Barcelona, Real Madrid, Bayern Munich and Paris Saint-Germain have scored more goals than Chelsea this season. However, Paris have a slightly lower goals per game ratio than Chelsea having played more games.

If scoring plenty of goals equates to boring football then could watching Barcelona be the secret cure to insomnia?