Wenger’s not the only one with a selection headache

Contest selection is a critical element that all fantasy football managers need to consider. If you focus on the English Premier League you will be familiar with the schedule – an early Saturday game, a number of games at the traditional Saturday time slot, a Saturday evening kick-off, 2 to 4 games on Sundays and the occasional Monday Night Football fixture. At Fantasy Football Portal we emphasise the importance of playing time – late swap, whereby you can edit selections in later kick-offs is not yet a common feature with the majority of operators so it’s vital that you don’t take too many chances, exposing your line-up, by including too many players who may or may not feature in the later games.

A good example of this is when there are just 2 matches scheduled on a Sunday and you enter a tournament which just features these 2 games. You will have the opportunity to edit your selections after official team news is announced on the early game but not on the later game. Of course it is the same for rival managers but if you put in the appropriate groundwork you can give yourself an advantage. 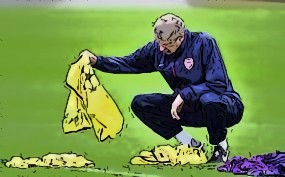 Arsenal entertain Chelsea in the late game and the Blues line-up looks fairly predictable, although, there have been some doubts about the fitness of Diego Costa and Eden Hazard. Costa did a right job on Arsenal earlier this season and it would be a surprise if he didn’t start here. The return of Alexis Sánchez gives Arsene Wenger a familiar dilemma and this could spell bad news for Theo Walcott. Selecting Sánchez, Walcott or even Joel Campbell leaves fantasy managers in a vulnerable position as any of the trio could easily start on the bench, while Olivier Giroud’s form is surely too good for him to be excluded.

Team news looks a bit more straightforward in the early game. Swansea City should go with the same line-up that defeated Watford on Monday unless Alan Curtis makes a tactical change. However, one player that warrants a special mention is Gylfi Sigurdsson. The Icelandic international looks to be the chief beneficiary following the departure of Jonjo Shelvey to Newcastle United. He took all 6 corners for the Swans against the Hornets and will surely feature in more set-piece situations now, in Shelvey’s absence.

Kevin Mirallas had a good game at Chelsea and looks worthy of serious consideration this week. Gerard Deulofeu will probably start on the other flank but the biggest question mark revolves around the right-back berth with a few possible scenarios for the Everton boss to weigh up.

Mondogoal have kicked off their £50,000 World Championship series and there are a couple of qualifiers featuring the Everton vs Swansea City and Arsenal vs Chelsea match-ups. Here’s our provisional line-up: