Wayne Rooney will be Manchester United’s centre-forward this season, following the departures of Robin van Persie and Radamel Falcao.

The 29-year-old was largely used in midfield by Louis van Gaal last season. He now returns to the role that he last played for an extended period in the 2011/12 season.

Russell Cane over at www.oulala.com has taken a look back over the past six Premier League seasons to see how Rooney has performed as an attacking threat, in relation to the position he has predominantly played in each campaign.

Unsurprisingly, the 29-year-old contributed just 12 league goals from 33 games in his midfield role last season. Yet, it was still the highest tally from any player at the club, as strikers Robin van Persie (10) and Radamel Falcao (4) failed to deliver. Rooney also led both for strike-rate, scoring a goal for every 7 shots taken. 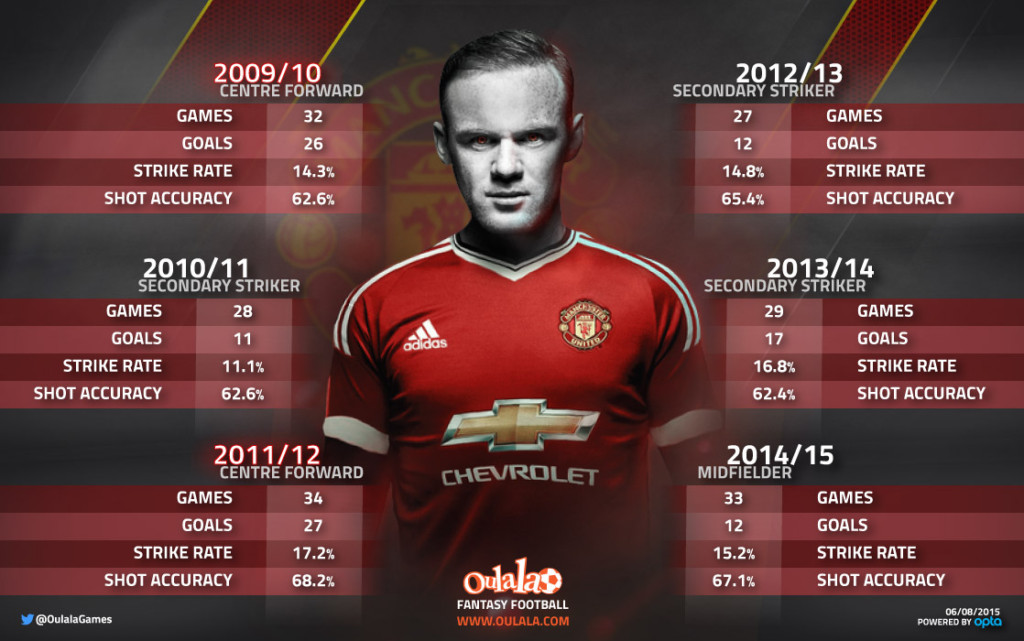 In the previous six Premier League seasons, Rooney has been used primarily as Manchester United’s centre-forward twice, in 2009/10 and 2011/12.

During the 09/10 campaign the United captain scored 26 goals from 32 games and came second to only Chelsea’s Didier Drogba (29) in the Premier League’s top scorer charts.

In the 11/12 season Rooney had to settle for second place yet again after netting 27 goals from 34 games. Arsenal’s Robin van Persie hit 30 goals.

Is this the season that Wayne Rooney finally puts that right?