It was arguably the most exciting match played last season and how times have changed since then. The reigning Champions are a shadow of their former selves while Spurs are looking like serious contenders for a Champions League spot and may even put in a sustained title challenge as well.

Mondogoal are giving customers the chance to win a pair of tickets for the upcoming fixture and it’s free to enter. Simply submit a line-up comprising of players from the Tottenham Hotspur vs West Ham United and Crystal Palace vs Sunderland games being played on Sunday and Monday this weekend to give yourself a chance of being in attendance at White Hart Lane for the occasion.

Here are a few pointers that might help with the team selection process and there’s no better place to start than with those vital team goal expectancies.

The in-form Harry Kane stands out in attack and we’re going to go with Christian Eriksen, Kyle Walker and Danny Rose to supply him with the ammunition this weekend. The two Spurs full-backs are earning more fantasy points per game for consistency than all the other available defenders.

The brilliant Dimitri Payet has unfortunately been ruled out with a long-term injury for the Hammers but it does mean that Aaron Cresswell could get a greater share of set-piece responsibility so he will complete our 3 man defence.

The Eagles are flying but exactly where their goals will come from is difficult to pinpoint. However, Yohan Cabaye, Yannick Bolasie and Jason Puncheon are sure to be in the thick of the action so all three are included.

Costel Pantilimon could be in for a busy afternoon for Sunderland and his WhoScored player characteristics page shows the Romanian shot-stopper averaging 4 saves per game, so we’re going to take a chance that he does enough to offset any goals he concedes. Yann M’Vila and Jeremain Lens have been the shining lights in a troubled season for Big Sam’s Black Cats and will complete our line-up!

Entries are restricted to 4 players from the same team and remember to edit your selections on the first fixture if necessary after the starting line-ups are announced. 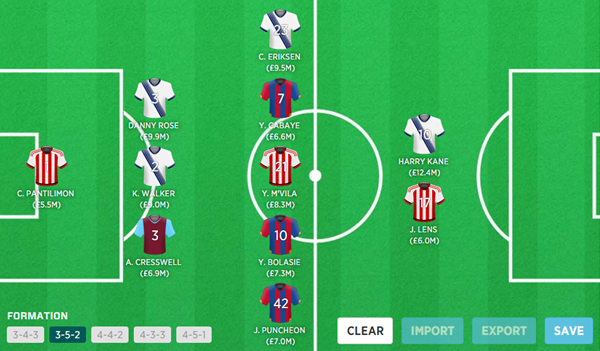 « ‘Happy’ Sterling proving his worth