‘Happy’ Sterling proving his worth

“Rodwell, Sinclair… Sterling! always be careful what you wish for #bench” were the words of former Liverpool player Jason McAteer regarding Raheem Sterling’s much publicised £49 million move away from Anfield to the Etihad Stadium. However, a few months on and how has Sterling fared so far for City?

This weekend Sterling faces his former club Liverpool for the first time since his summer transfer to Manchester City. Fantasy football game www.oulala.com have taken a look at whether or not the youngster’s move is beginning to pay off.

Up until now Sterling has had fewer successful tackles per game with City (0.64) than he did with Liverpool last season (0.86). The Jamaican born Englishman also had a higher percentage of successful take ons for Liverpool last season at 50 per cent compared to this year’s 42 per cent for City. As he did with Liverpool he still lacks a certain level of consistency. From his hat-rick in a 5-1 demolition of Bournemouth to his relative anonymity in City’s defeat to West Ham, Sterling at times can still be erratic with his performances. 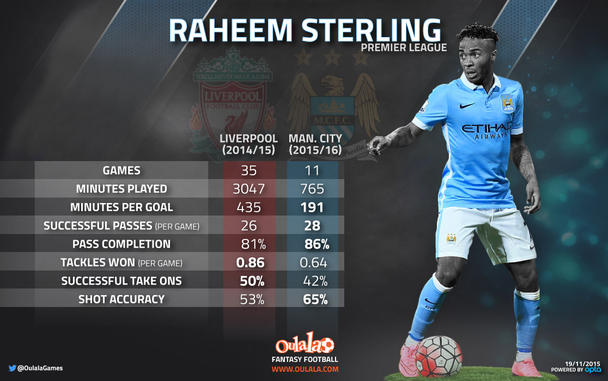 However unlike Jack Rodwell and Scott Sinclair who have fallen down by the wayside, overall it is evident that Sterling is earning his place as a regular first-team player for the Blues. Far from being a City bench-warmer that many tipped him for, Oulala’s stats reveal that the 20-year-old overall has a seemingly greater hunger for the game now at City than he did for the Reds.

His shot accuracy for City this season stands at 65 per cent. When compared to last season’s shot accuracy of 53 per cent for Liverpool, indicating that Sterling is being better utilised in attack. Last season with no Luis Suarez or injury prone Daniel Sturridge, Liverpool had to rely a lot on Sterling as being a match winner and was often used as a makeshift striker. Oulala’s stats reveal that at City Sterling appears to have more freedom and is excelling on playing in his favored positions on the wing.

It remains to be seen whether or not Sterling can achieve legendary status at Manchester City but no doubt he will be looking to get one over on his former club this weekend.