Time To Take A Hit

Harry Kane comes into the FPL mix in time for GW11

Taking hits cost us far too many Fantasy Premier League points last season, so we’re happy to have gone 10 rounds without any this time around. However, sometimes circumstances dictate and we feel now is the right time to shake things up a bit.

Overlooking Harry Kane was a tough call to make but the Spurs’ striker looks head and shoulders above the rest, so now feels like as good a time as any to bring him in. His xG90 (expected goals per 90 minutes) is already 0.10 higher than last season and he’s averaging an astonishing 6.3 shots per game, a marked improvement on the 3.7 he averaged last season, which was still more than enough to see him finish the campaign as the Premier League’s top scorer.

Bringing Kane in does mean that sacrifices will have to be made elsewhere though due to the fact that he’s the most expensive player in the game.

Gabriel Jesus is first to go, while Kane’s team-mate Christian Eriksen is released somewhat more reluctantly. Arsenal have a tough upcoming schedule so Hector Bellerin is the third player joining them through the exit door.

So, who else comes in?

Well, when we tell you that we have gone for a Liverpool defender you might start to question our sanity but to make matters worse, when we reveal that it is the much-maligned Alberto Moreno, we couldn’t blame you if thought about sending for the men with white coats!

On the plus side, we will argue that Liverpool have the pick of the short-term fixtures and his price tag does make him affordable.

We’ve also been talking up the claims of Leroy Sané for much of the week, so we’ve put our money where our mouth is and he completes the transfer activity as we press the button on a 8 point hit. 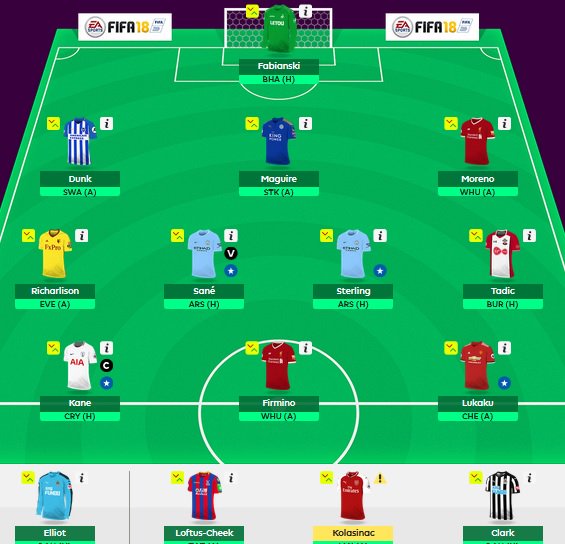 Lukasz Fabianski takes over from Robbie Elliot in goal, on the strength of his side’s better ‘clean sheet’ chances, while we’ve no hesitation in handing the captain’s armband to Kane.

Kane also dovetails well with Romelu Lukaku, so it should increase our captaincy options going forward.

Will we regret making the changes or can we get a quick return to wipe out that 8 point deficit?

« The Missing Piece Of The Puzzle