In-form Number 9s have the firepower to claim Shootout glory

We’ve had an early look at this weekend’s £10k Mondogoal Premier League Shootout which features 6 of the 7 matches played on Saturday. As usual we start with those key goal projections based on the odds lines set by the bookmakers.

Manchester United have the highest goal expectancy and also appear to have very strong claims for a shut-out with the Baggies pencilled in at just 0.55 goals. Anthony Martial looks impossible to leave out with his low price tag and is selected along with Ander Herrera who should return to the fold after starting on the bench against CSKA Moscow in midweek. We’re happy to include Marcos Rojo who has really stepped up to the plate as a replacement for long-term injury victim Luke Shaw and is excelling in a number of key areas as highlighted in this WhoScored article by Ben McAleer. The impressive Chris Smalling completes a formidable Red Devils quartet.

West Ham’s Aaron Cresswell is capable of chipping in with a goal or an assist and he completes our 3-man defence while Kasper Schmeichel gets the nod in goal for a buoyant Leicester City side.  The Foxes are seemingly full of goals again this week and Jamie Vardy will bid to find the net in a ninth consecutive Premier League game. He’s included as well as his team-mate Riyad Mahrez.

Dieumerci Mbokani should be fit enough to earn a recall to the Norwich front line, making it a trio of number 9s in our attack this week. Ross Barkley has been in a rich vein of form and looks more than capable of another good fantasy score, as does Sadio Mané, who could really terrorise Big Sam’s Black Cats this weekend.

Remember to have a plan B prepared in case any of your players are excluded for whatever reason. You need to have replacements in mind who’ll fill in should any of your selected players be omitted from their respective starting line-ups and also make sure that the they can be accommodated within budget constraints or by any excess expenditure that is left over.

The field is capped at 2200 entries and 20% of the field will finish in the money for this £5 buy-in event. 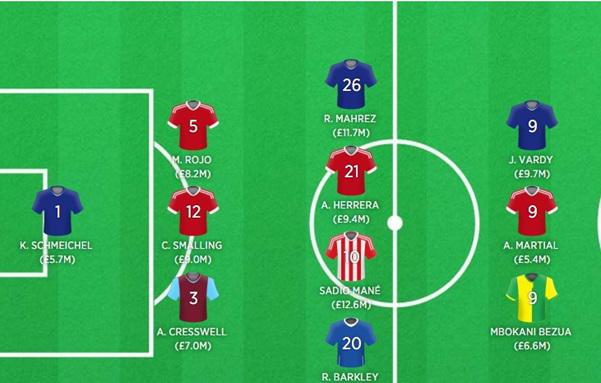