The Fox and Anchor

Riyad Mahrez scored twice to sink Sunderland as Leicester ran out 4-2 winners. While 16-year-old Reece Oxford stifled the Arsenal attack on his Premier League debut as West Ham secured a shock 2-0 away win at the Emirates.

The pair are set to meet in what few would have predicted to be this weekend’s must-see battle. Opta-powered fantasy football game www.oulala.com have taken a detailed look at each of their performances before they lock horns. 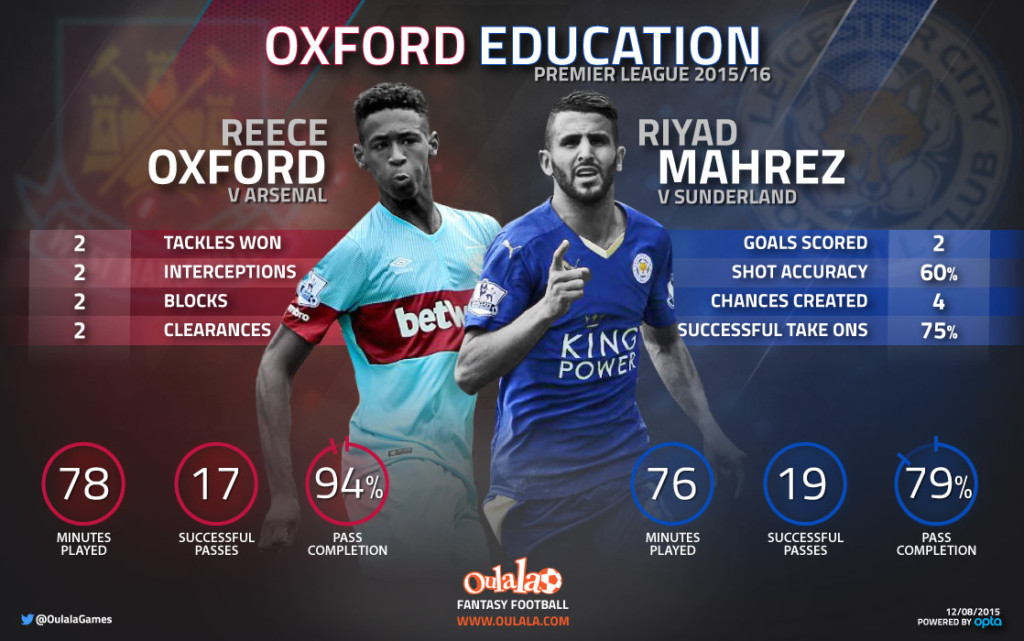 Riyad Mahrez, one of the Foxes stars from their ‘Great Escape’ last season, shone in Leicester’s win over Sunderland. The Algerian hit a seven minute brace in the first-half, a header from a Marc Albrighton cross and a penalty he won himself after being brought down just inside the penalty area. Mahrez was denied a deserved hat-trick, as a further shot hit the post.

A shot accuracy of 60% was complimented by a 75% success-rate for attempted take-ons. The 24-year-old created 4 chances for his team mates and successfully made 19 of an attempted 24 passes resulting in a 79% pass completion.

A month before Reece Oxford collects his GCSE results, the 16-year-old was tested against Arsenal’s Mesut Ozil, Aaron Ramsey and Alex Oxlade-Chamberlain. However, it was Oxford that did the educating. Sitting in front of the West Ham defence, he mopped up waves of Arsenal attacks throughout the game.

Oxford won 2 tackles as well as making 2 interceptions, 2 blocks and 2 clearances. He completed 17 of his 18 passes, resulting in an outstanding completion-rate of 94%, the best from any player on the pitch,

Can West Ham dish out an Oxford education to Leicester or will Riyad Mahrez be the fox in the box once again?

Time to unleash the Beast »