The Cream of Manchester

Anthony Martial rescued a point for Manchester United, scoring a second-half equaliser, as they drew 1-1 with CSKA Moscow in the Champions League on Wednesday night. At the Etihad, Kevin De Bruyne netted a 91st minute winner for Manchester City as they beat Group D opponents Sevilla 2-1.

Both players have hit the ground running since arriving at their new clubs. The duo have enjoyed impressive individual performances in both Europe and the Premier League.

As the pair come head-to-head in this weekend’s Manchester derby, Fantasy Football game www.oulala.com have taken a closer look at Martial and De Bruyne to see how the two players have matched up in the Premier League so far this season.

Martial and De Bruyne have each made five league appearances. However, it’s the Belgian that takes the majority of the plaudits.

According to Oulala’s data, the 24-year-old has completed more successful passes per game (44 to 18) and has a better pass completion (78% to 72%) than Martial in the Premier League. 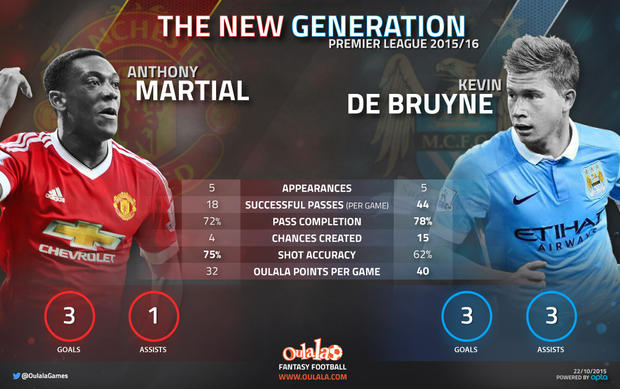 Oulala’s stats also show that the Belgian has been the more creative of the pair. He has made more assists (3 to 1) and created more chances (15 to 4) than the Manchester United forward.

Both De Bruyne and Martial have scored an impressive 3 goals in their opening five league games. However, the Frenchman boasts the superior shot accuracy (75% to 62%).

With De Bruyne outshining Martial in a number of key areas, it is no surprise that he has also tallied more points on Oulala than his opponent (40 to 32 per game).

Can Anthony Martial turn it on at Old Trafford or will Kevin De Bruyne lead City to victory yet again?