At the recent SBC Betting on Football Awards ceremony which took place at the Playboy Club in London FantasyBet triumphed in the ‘Best Fantasy Product’ category. Armed with this information, we didn’t need another excuse to check out their site again and what really caught our eye this time was one of the novel features they offer – the ‘Flash’ game. This is a contest where you are assigned a random list of players from which to select your squad in just 3 minutes! Sounds easy and aligned with our fantasy football expertise, what could possibly go wrong?
If you read the article we published earlier this week entitled Goals aplenty at Goodison you will know that we really liked the idea of combining blocks of Everton and Leicester players in anticipation of a high-scoring affair in which the chief protagonists would all contribute. Elsewhere, Chelsea don’t seem quite the same force without Jose Mourinho but the Black Cats aren’t expected to trouble them too much so players from the Blues rear-guard are very much in our line of thinking. We also like the look of Georginio Wijnaldum this weekend who will surely be relishing the opportunity that the visit of Aston Villa presents.
Our first port of call was to whizz through the WhoScored match previews to familiarise ourselves with likely starters in each game. With this fresh in our mind we were good to go.
Our list was quickly revealed to us and the countdown began. Filtering by team seemed a good tactic so we went for Everton first but there was no sign of Barkley, Lukaku, Deulofeu or Koné. Not to worry we switched to Leicester City but Vardy, Mahrez and Albrighton were nowhere to be seen. Surely, Geordie-n-io wouldn’t let us down. Unfortunately he did and we didn’t fare any better in the Chelsea department either!
Things were getting desperate and the clock seemed to be getting more attention than the player list. This is where those fast-finger skills we inherited all those years ago on the Atari really began to come to the fore. We started to put the semblance of a team together until we, you guessed it, ran out of time! The remainder of the line-up was auto-completed as per the rules and we were left with this: 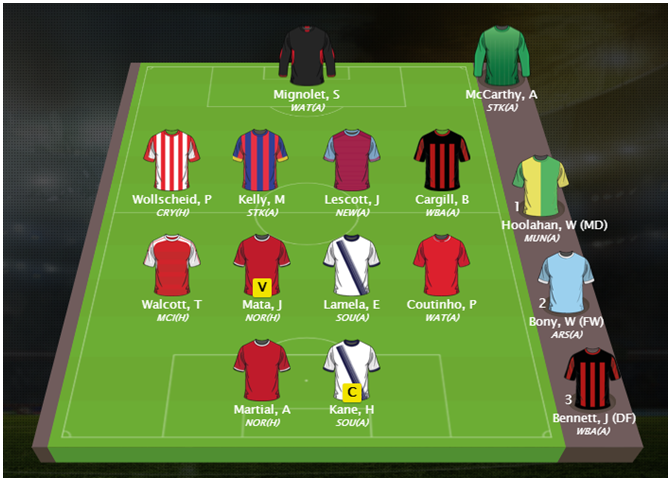 Kelly, Cargill and Bennett are unlikely to feature but the rest of the team doesn’t look too shabby. It’s a fun concept and well worth a try. Just make sure you have a Plan B and Plan C ready!

« Nemo has eyes on Merlin’s crown

Champions League chasing Foxes have history on their side »