Chelsea and Manchester United look to have the easiest fixtures this weekend based on our game difficulty goal expectancies table. However, Sunderland and Norwich City will be no pushovers as Jose Mourinho and Louis van Gaal look for some much-needed respite, having both come in for a barrage of criticism of late. 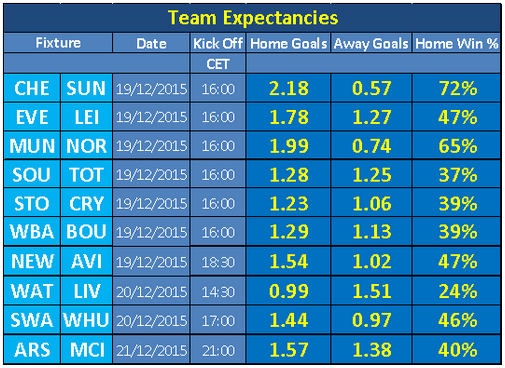 The bookmakers are predicting something of a goal-fest at Goodison Park where table-topping Leicester City will be the visitors. This could be the perfect fixture for fantasy football managers to link together blocks of players from the same team in the hope that they all connect in a positive manner.
Jamie Vardy and Riyad Mahrez need no introduction but Marc Albrighton has been going about his business somewhat unnoticed and does have 6 assists to his name already. Only three players have more, the two best ranked players according to WhoScored in Mesut Özil and the aforementioned Mahrez with Gerard Deulofeu being the other. Everton’s Spanish winger is in a rich vein of form and has been linking up well with Arouna Koné, Ross Barkley and Romelu Lukaku. Grouping these guys together could be a strategy that pays off in Game Week 17. It’s the only fixture being played in which 3 or more goals are predicted!

Nemo has eyes on Merlin’s crown »