Team of the Year

Oulala’s points system is the most diverse and advanced fantasy football scoring matrix ever developed thanks to the stats supplied to them by their partners at Opta.

As the season has finally drawn to a close, they decided to check out what the Premier League Team of the Year would look like purely based on Oulala points and Opta stats.

Forget biased opinions, forget players picked solely because they play for one of the top six sides or have a two-month purple patch… ahem… Philippe Coutinho.

This is the real Premier League team of the Year!

Liverpool’s Simon Mignolet takes the number one jersey. The 27-year-old managed a total of 13 clean sheets, a tally only bettered by Joe Hart. The Belgian completed the most punches of any keeper in the Premier League this term (41) and saved 2 of the 3 penalties that he faced at a success rate of 67%.

The right-back spot is taken by Burnley’s Kieran Trippier. The 24-year-old made the most interceptions of any right-back in the Premier League this season (82). He also made a total of 59 key passes, the second highest of any defender.

Trippier’s team mate, Jason Shackell, takes the first of the two centre-back spots. Despite being relegated, the Burnley skipper tallied some very impressive stats. The 31-year-old made the most clearances (445), the most blocks (52) and won the third most aerial duels of any player (152).

Everton captain Phil Jagielka joins Shackell in the heart of defence. The England international managed the most successful passes of any defender (1,657). He also completed the third most clearances (377) and the fifth most blocks by any player (39).

Jagielka’s Everton club mate, Leighton Baines, takes the left-back spot. The 30-year-old made the most assists (9) and the most key passes of any defender (61). He was also the third most fouled defender, drawing 49 in total. 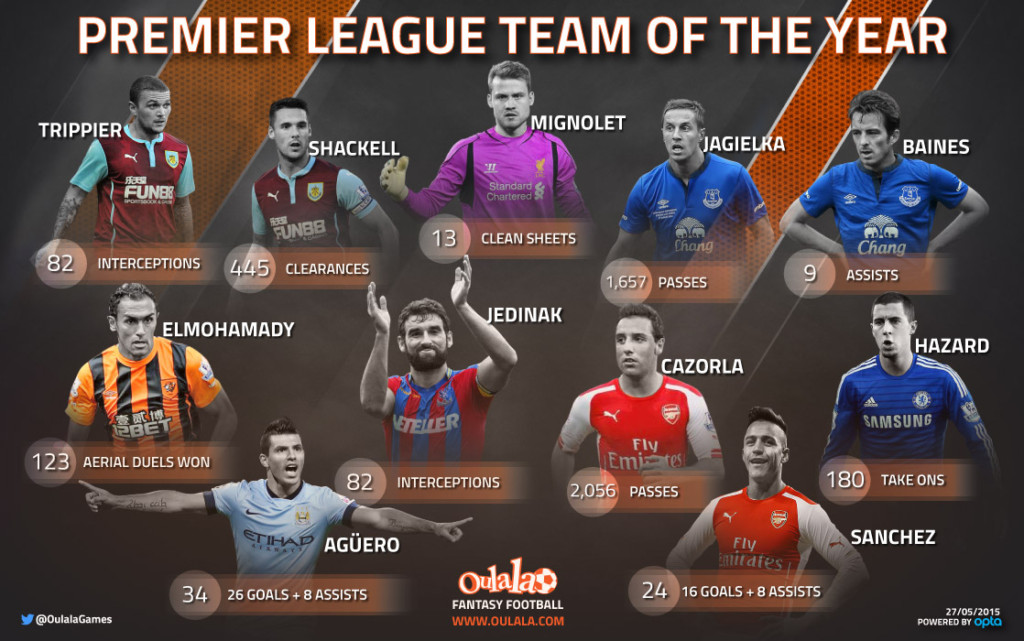 The right-side of midfield is occupied by Hull’s Ahmed Elmohamady. The Egyptian surprising won the most aerial duels of any midfielder this season (123). He also made the third most clearances too (108).

Another captain that makes the team is Crystal Palace’s Mile Jedinak. Despite playing just 24 games this term, the Australian made the most interceptions of any midfielder (82) and also won the fourth most aerial duels too (106).

Arsenal’s Santi Cazorla joins Jedinak in the centre of midfield. The Spaniard completed the second most assists (11), the third most passes (2,056) and had the third most shots of any midfielder (93).

It is no surprise that Chelsea’s Eden Hazard takes his place in the team on the left. The Belgian scored the most goals of any non-recognised striker (14), made 1,909 successful passes and made the most key passes of any player in the Premier League (91). The 24-year-old also completed the most successful take-ons (180) and drawing a total of 113 fouls, was the most fouled player in the league too.

The Premier League’s top goalscorer may have been overlooked in the PFA team of the year but he makes this team with ease. Manchester City’s Sergio Aguero scored 26 goals and made 8 assists, a combined total of 34 goals that he was involved in, the most influential player in the Premier League. The Argentine also had the most shots of any player this season (148).

Alexis Sanchez joins Aguero up top. The Chilean played a part in 24 of Arsenal’s goals this term with 16 goals and 8 assists, making him the Premier League’s third most influential attacking player. The 26-year-old successfully completed 115 take-ons, the second most from any player this season. Sanchez was also fouled a total of 72 times making him the fourth most fouled player overall.

There you have it. Oulala’s, and statistically, the eleven best Premier League players from the 2014/15 season.