Time for an English Renaissance ?

The head-to-head record between the two managers sees Wenger with the upper hand. The two meetings between the pair during Sherwood’s tenure at Tottenham saw Wenger get the better of Sherwood on both occasions. A 2-0 win in FA Cup third round at the Emirates last season, quickly followed up two months later by a 1-0 away win at White Hart Lane in the league.

The results between the two sides were very one sided this season while former boss Paul Lambert was still at the helm. Arsenal won 3-0 at Villa Park in September and then followed up with a 5-0 home win at the Emirates in February. The two wins see Wenger’s men go into Saturday’s final 8-0 up on aggregate this season. 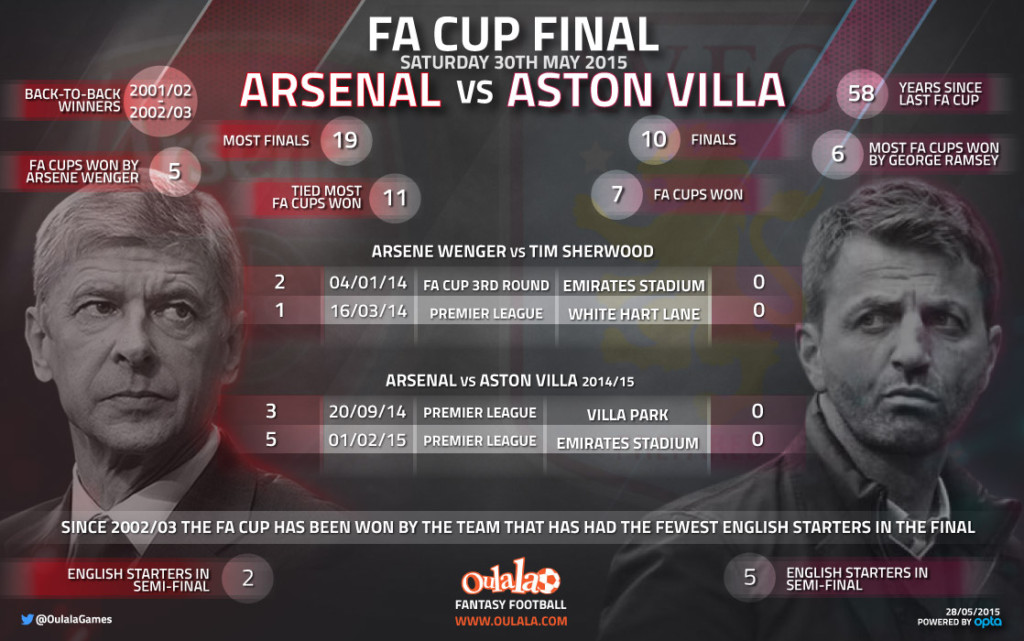 While Arsenal look to retain the FA Cup and secure their second back-to-back trophy, a feat they last achieved in the 2001/02 and 2002/03 seasons, Aston Villa will be looking to secure their first FA Cup in 58 years when they beat Manchester United 2-1 in the 1957 final.

One interesting fact that appears firmly in Arsene Wenger’s favour is that since the 2002/03 season the FA Cup final has been won by the side that has fielded the fewest English players. In the 2002 final Arsenal beat Chelsea 2-0 with the help of David Seaman, Sol Campbell, Tony Adams, Ashley Cole and Ray Parlour, all five began the game. Chelsea only started two Englishmen, Frank Lampard and Graeme Le Saux.

The facts and stats support a comfortable win for Wenger’s men. But this is the FA Cup, and in the FA Cup… anything can happen.

« Team of the Year