Sky Sports pundit Graeme Souness really tore into the Arsenal players after they were dismantled by a young Manchester United side on Sunday. The former Liverpool and Scottish midfielder didn’t mince his words saying that this Arsenal side ‘border on being a joke’, also adding that ‘I will stand on my head if they prove me wrong and go and win this league’. He wasn’t finished there either as he continued to put the boot in, referring to the Gunners as ‘insipid’, ‘weak’ and ‘pussyfooted’.

Arsenal will at least have the chance to brush the cobwebs off and get their title charge back on track when they entertain Swansea City at the Emirates on Tuesday evening. Arsene Wenger will surely be expecting a reaction. It would be easy to point the finger at any number of  individuals, but both Theo Walcott and Peter Cech were awarded sub 6 ratings by WhoScored for their efforts at Old Trafford, so it wouldn’t be the biggest surprise in the world to see Olivier Giroud replacing the former in attack against the Swans. On a more positive note the bookmakers have Arsenal as the strongest Gameweek 28 favourites so we’re not expecting to see the likes of Mesut Özil being deserted by too many fantasy football managers. 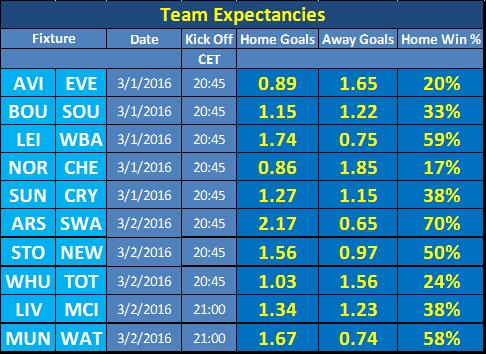 The pick of the action takes place on Wednesday when Manchester City and Liverpool meet again, quick on the heels of that enduring Capital One Cup Final. The Citizens cannot afford to lose too much more ground in the title race so they will be desperate to pick something up at Anfield.

Tottenham Hotspur, the new English Premier League title favourites with the bookies, have a tricky local derby to negotiate when they visit West Ham United. The Hammers are likely to provide a stern test but this Spurs side looks to have the appetite and character needed when you’re embroiled in a title race, something that cannot be said of their North London neighbours at this stage of the season.

Sometime it pays to strike while the iron is hot, so Marcus Rashford, who has hit a brace in both of his first-team appearances for Manchester United, might be a popular choice in fantasy teams this week. The Red Devils entertain Watford at Old Trafford on Wednesday and the youngster has been valued at just $4,000 on DraftKings despite hitting 37 and 32 points respectively in those 2 starts.

It promises to be another terrific round of fixtures – can Arsenal bounce back?

« Much maligned Sakho in the best of Kompany