A reliable goalkeeper is the foundation on which all fantasy teams should be built.

Clean sheet points are vital for players who want to compete for big cash prizes, while a goalkeeper who regularly saves penalties can be worth their weight in gold.

Here is the Fantasy Football Portal guide to five La Liga goalkeepers to consider for your teams.

Being Barcelona’s goalkeeper can be a thankless task at times, requiring a different skillset to the goalkeeper role at many other clubs.

Bravo’s reliability has been key for Barcelona this season and in his last seven matches in all competitions he has conceded just one goal. Bravo’s nine goals conceded this season is bettered only by one regular La Liga goalkeeper, who also features on this list.

A series of excellent recent showings have pushed Bravo’s WhoScored rating for La Liga matches up to 7.09 for the season – marking him out firmly among the league’s elite goalkeepers.

Valencia are still waiting for their first La Liga win under Gary Neville, but goalkeeper Jaume has ensured the Englishman’s reign has not started as poorly as it could have.

The 25-year-old has been quietly outstanding in goal but daily fantasy football managers may be put off by his occasional lapses in concentration.

Jaume has the potential to be a big scoring goalkeeper though, as he is renowned as one of La Liga’s most effective goalkeepers from penalties. He recently saved a spot kick from Eibar’s Saúl Berjón in a 1-1 draw and Jaume’s performance also kept the score down as Valencia were soundly beaten 2-0 by Real Sociedad.

Many pundits understandably believed Atlético Madrid would struggle to replace Thibaut Courtois, but Jan Oblak has stepped up to the plate impressively for Diego Simeone’s men. 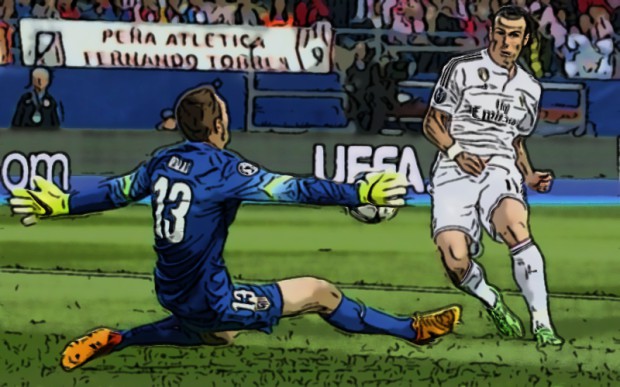 Atléti are on course to beat Spain’s big two to win a second La Liga title in three years and much of their success has been down to defensive resilience and the quiet brilliance of Oblak in goal.

The 23-year-old Slovenia international is well protected by his defence but he has been excellent when called upon, with his terrific reflexes ensuring Atléti’s last line of defence is a strong one.

His 14 clean sheets so far this season is by far the highest in La Liga and nobody has conceded fewer goals than Oblak, whose numbers make him stand out from the crowd.

Oblak has currently kept six clean sheets in a row as Simeone’s side tighten their grip at the top of the La Liga table and he will continue to be a key man for Atléti in the coming months.

The current season got off to a difficult start for Keylor Navas with speculation he could be a makeweight in a deal to bring Manchester United’s goalkeeper David de Gea to Real Madrid.

But it is testament to the character of Navas that the 29-year-old goalkeeper has got his head down and focused on the job in hand, putting talk about his future to one side.

Outstanding at the 2014 World Cup in Brazil as Costa Rica made it to the quarter-finals, Navas’ fine form this season has helped to keep Real Madrid on track despite the club replacing coach Rafael Benítez with Zinedine Zidane.

Navas was unable to save any of the four penalties he faced in that World Cup quarter-final against Louis van Gaal’s Netherlands, but he has a solid reputation for stopping spot kicks too.

Our wildcard pick of La Liga goalkeepers to consider for fantasy teams is Frenchman Alphonse Aréola, who has been excellent between the posts for top four contenders Villarreal this season.

At just 22 years of age, Aréola is one of La Liga’s youngest goalkeepers but he has forged a reputation as one of the best in the division as his club challenges for European qualification.

Aréola has kept six clean sheets already this season, including one in a superb 1-0 home victory against Real Madrid, and he is another goalkeeper who is known for saving penalties, stopping a spot kick from Eibar’s Dani García in a 1-1 draw, for which he earned a WhoScored rating of 8.9.

Oblak, Navas and Bravo are the obvious La Liga goalkeeper fantasy picks, but ever-present Aréola could be a wise choice for anyone looking for a more affordable option.