As Aston Villa prepare for their FA Cup semi-final clash with Liverpool on Sunday, one player has exploded into life in recent weeks.

Christian Benteke is currently the most in-form striker in Europe right now according to stats released by Opta-powered fantasy football game www.oulala.com based on goals scored and strike rate from his last six league games.

The 24-year-old is currently the leading striker in Europe having scored 8 goals in Aston Villa’s last six Premier League games including a hat-trick against Queens Park Rangers, a brace away to Sunderland and winners against both Tottenham and West Brom. 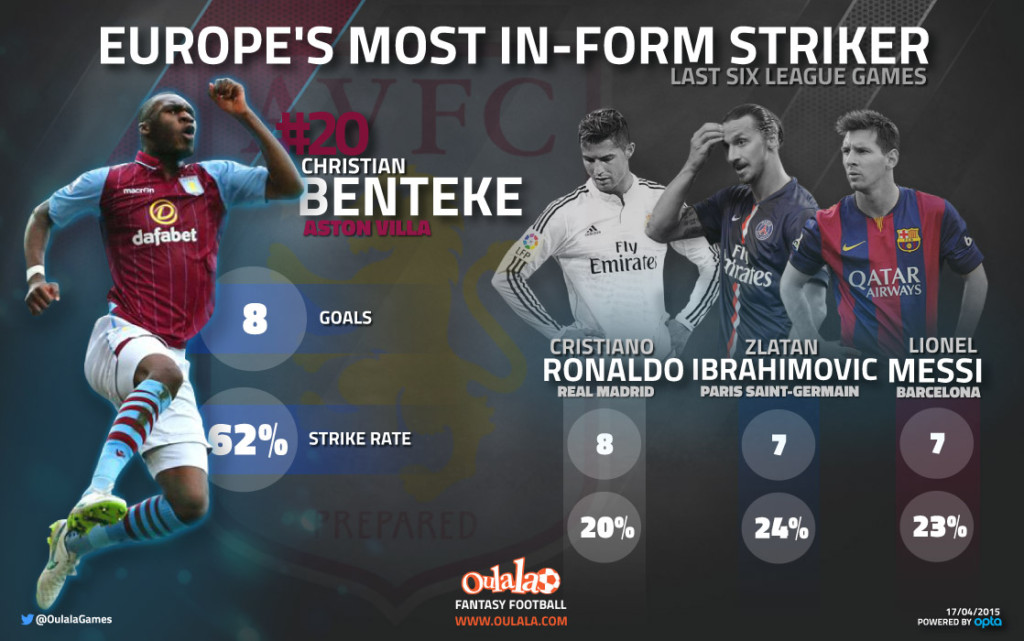 The only player in Europe that can match the Belgian for goals scored in recent weeks is Cristiano Ronaldo. The Portuguese striker has also netted 8, five of which came in Real Madrid’s 9-1 win over Granada. However, Benteke has been far more clinical than the Madrid forward, scoring his 8 from just 13 shots at a impressive rate of 62% compared to the 41 shots that it has taken Ronaldo to net his, a much lower rate of 20%.

Zlatan Ibrahimovic and Lionel Messi are not far behind the Villa forward. Both have netted 7 goals in their last six league matches. The Swede boasts the slightly better strike rate with his 7 goals coming from 29 shots (24%) compared to the 30 shots it has taken Messi to score his 7 (23%).

Christian Benteke has taken Villa to the top of European football for the first time since 1982. Can he continue his fine form and also lead them to their first FA Cup final for 15 years ?

« No Red Carpet for Mata

Clean sheets matter – but these stats are more than ‘Special’ ! »