Our team for the double gameweek was a decent success, scoring just over 100 points, mostly down to the Sunderland duo of Patrick van Aanholt and Jermain Defoe.

However, our faith in West Ham trio Dimitri Payet, Aaron Cresswell and Mark Noble did not really pay off, although Alberto Moreno and Eden Hazard were both good selections for our side..

This weekend is the last gameweek of the season so do not forget to pick your FPL team.

Here are our recommendations for your XI for the coming GW38.

Opposing Aston Villa has been an obvious FPL strategy all season and there are no reasons to stop using such a lucrative tactic now, so Petr Čech is our selection in goal. 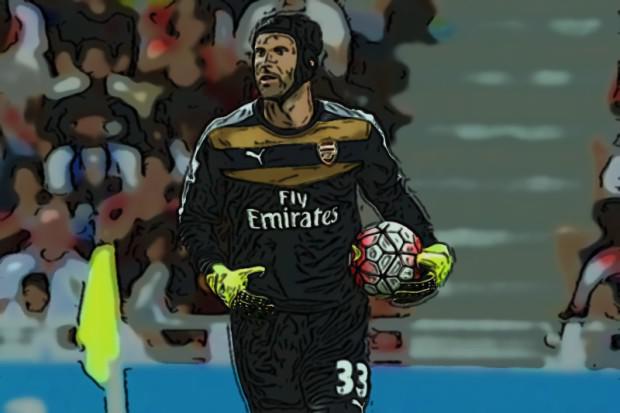 The Arsenal stopper has kept 15 clean sheets this season, including three in his last four appearances for the Gunners, and should collect another shut-out on Sunday.

Our Arsenal-flavoured team continues in defence, where Héctor Bellerín is chosen for his ability to cause sides problems with his incredible pace.

Bellerín has five assists and with Villa unlikely to put up much of a fight at the Emirates, the talented youngster has every chance of adding to his single Premier League goal this season too.

Virgil van Dijk has been superb for Southampton this season, with the former Celtic centre-back filling in admirably after the loss of key defender Toby Alderweireld to Tottenham.

Southampton play Crystal Palace at home on the last day, in what looks like a very winnable game for the Saints, while van Dijk has also hit three goals this season.

However, there have been no Southampton clean sheets in the Premier League since February.

Manchester United have had a forgettable season overall, but the development of Chris Smalling – Mike to his manager, Louis van Gaal – has been one of the club’s bright spots.

Smalling looks certain to start for England at Euro 2016 this summer and he should score points for us on GW38, with United at home to out-of-form Bournemouth on the final day of the season.

It will be the Championship for Newcastle United next season, but Andros Townsend might well have done enough to stay in the Premier League.

Townsend has hit four goals since signing for the club in a £12 million deal in January and has shown enough form that some have even suggested an England recall could be in the offing.

Newcastle are at home to Townsend’s former club Tottenham on Sunday, so there is plenty of motivation for the winger to perform to a high standard, despite his side’s relegation.

Our captain for GW38 is Alexis Sánchez as we continue to stack our side with Arsenal players.

Sánchez had an extended dip in form in the middle of the season, but the Chilean has scored seven goals in his last nine matches as he bounces back to form.

He also has five assists this season and should pick up a big score against a hapless Villa side.

Perhaps the top form player in the Premier League right now, Dušan Tadić is a must-pick fantasy football player, especially as Southampton face a Palace side with an eye on the FA Cup final.

A pair of goals and a whopping six assists in just four games means Tadić should certainly be on your shortlist for this weekend’s Premier League action.

Like Sánchez, André Ayew is having a strong end to the campaign after a poor run in the middle of the season, with the Swansea City man scoring three goals in his last two matches.

Ayew is classed as a midfielder in many daily fantasy football games, but often starts in attack for Swansea, which is an angle that can be exploited.

He has contributed 11 goals and five assists this season following his free transfer move from Marseille – certainly one of the top signings of the season.

The third Southampton star in our FPL team for GW38 is Shane Long, with the Republic of Ireland striker having hit three goals in his last five matches.

Southampton have six wins in their last eight Premier League fixtures and will be heavy favourites to continue that fine run of form against Palace on Sunday, with Ronald Koeman’s side still in with a slight chance of qualifying for next season’s Europa League.

Manchester United paid a huge amount of money to sign Anthony Martial last summer, but it is hard to argue that the French forward is not going to be worth every single penny of that giant fee.

Martial has 11 goals this season, including three in three games, while United face a Bournemouth side that has lost five of their last seven in the league this weekend.

Our most expensive selection for the GW38 team is Sergio Agüero, who remains one of the most important players in the world of fantasy football.

Agüero has had spells out of the side through injury this season but has still managed to score 24 goals from just 28 league starts.

Manchester City travel to Swansea on the last day of the season, Manuel Pellegrini’s final match in charge, needing a win to secure Champions League football for next season, so Agüero should be highly motivated.

He has also hit 10 goals in his last 10 Premier League games and is therefore about as reliable a goalscorer as there is in the division.

Karl Darlow is one of the cheapest players in the FPL game, so is ideal as a back-up goalkeeper.

Patrick van Aanholt is deservedly our first choice substitute after his excellent performance in GW37, while fellow back-up defender Christian Fuchs has been a fine performer all season, although the champions face a testing trip to Chelsea on the final day.

Finally, Ashley Westwood is very affordable and the Villa midfielder scored a brace recently, so is worth selecting as a cheap squad-filling option. 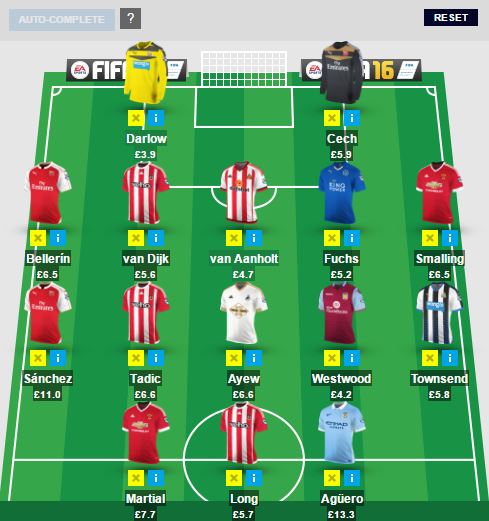