Game Week 13 of the 2015/16 English Premier League season just happens to fall in between a double round of International fixtures and the penultimate group games in this season’s UEFA Champions League.

Arsene Wenger and Louis van Gaal will more than likely be bemoaning their injury lists so expect both men to be in a sensitive mood this week when they greet the media. Arsenal face a trip to the Hawthorns ahead of their must-win home clash with Dinamo Zagreb while Manchester United need to negotiate a trip to Watford before looking to seal Champions League qualification at home to PSV Eindhoven. Injuries to Chris Smalling and Michael Carrick will not have sat well with the Iron Tulip after hearing that Antonio Valencia had already been ruled out for around 5 months while Arsenal’s squad is starting to look somewhat threadbare.

Jurgen Klopp’s Liverpool side are already vying for top spot in the injury table ahead of a daunting away trip to Manchester City while Tottenham manager Mauricio Pochettino will surely have one eye on the England versus France game, assuming it goes ahead. The Spurs boss will be without the suspended Erik Lamela for the visit of the Hammers on Sunday but could have 4 of his Spurs players in action for England on Tuesday evening including the impressive Dele Alli. Tottenham are starting to look like serious contenders for a Champions League spot and Alli’s progress was highlighted in this Ben McAleer WhoScored article so the Spurs boss, like many of his counterparts,  will not want to hear of any adverse injury news filtering through after this fixture.

Under-pressure Chelsea have the highest goal scoring expectancy in what promises to be a riveting set of matches for fantasy football managers to get their teeth into. 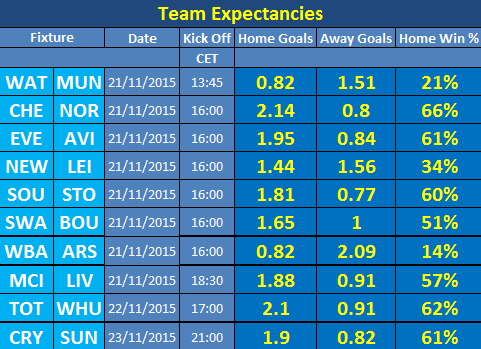 You might recall that DraftKings, the daily fantasy sports operator that is preparing for a UK launch in December, have switched from an 8 a-side to an 11 a-side soccer format and also adjusted their scoring system. We’ll take a look at some contests from the GW13 schedule to see what impact these changes are likely to have on the team selection process and we will include more notes on the added risk of some of the aforementioned managers looking to preserve their star players so stay tuned for that!

« Mr Shakira insists Stones is ‘The One’