Daniel Sturridge scored two of Liverpool’s three goals in their 3-2 win over Aston Villa in the Premier League last Saturday. Romelu Lukaku followed this up on Monday night with two goals himself, as Everton came back from two down to win 3-2 at West Brom.

The in-form pair now come head-to-head on Sunday as Liverpool travel to Goodison Park with Everton sitting a point and four places ahead of their rivals in the table.

Fantasy Football game www.oulala.com have taken an in-depth look at Lukaku’s and Sturridge’s spells at each side in the Premier League, all the way back to when they joined the clubs.

Sturridge has played far fewer minutes in the Premier League for the Reds due to injuries, despite joining Liverpool 6 months earlier than Lukaku joined Everton. 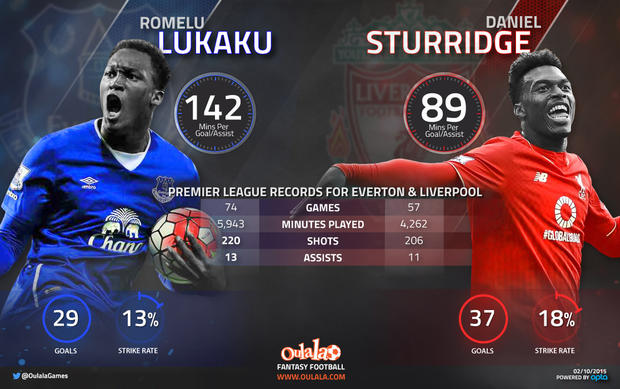 However, the 26-year-old has netted 8 more goals in the Premier League for Liverpool than the Belgian has for Everton (37 to 29),

Lukaku leads Sturridge for assists (13 to 11), however when goals and assists are combined and analysed on a per minute basis, the Liverpool striker is the clear winner.

Sturridge has scored or assisted, on average, every 89 minutes for Liverpool in the Premier League. In contrast, it has taken Lukaku longer, averaging a goal or assist every 142 minutes.

Which striker can carry their excellent form into Sunday’s big clash?