The Championship is one of the most unpredictable leagues in the world, which can make it particularly challenging for daily fantasy football players.

With any club able to beat any other team on any given day, putting together a Championship side that can take on all-comers requires plenty of research and risk-taking.

Here’s the Fantasy Football Portal guide to the best goalkeepers to pick from the Championship.

Middlesbrough have been the outstanding team in the Championship over the first half of the season, with recent wins over promotion rivals Burnley, Derby County and Brighton helping to establish Aitor Karanka’s men at the summit of the division.

Their success has owed a large debt to the solidity of their defence and the excellence of their goalkeeper, Dimi Konstantopoulos, who has kept 15 clean sheets from 24 appearances.

Boro have recorded eight clean sheets in a row, the Teesside club conceding only two goals all season in home matches at the Riverside, the last of which was against Brentford in September.

Although 37-year-old Konstantopoulos has been extremely well protected by the Boro back four he has still collected two man of the match awards, showing his importance to the club.

If Middlesbrough are to return to the top flight for the first time since 2009, the much-loved Greek goalkeeper will have to remain at his best, even if he does occasionally have a clanger in him. 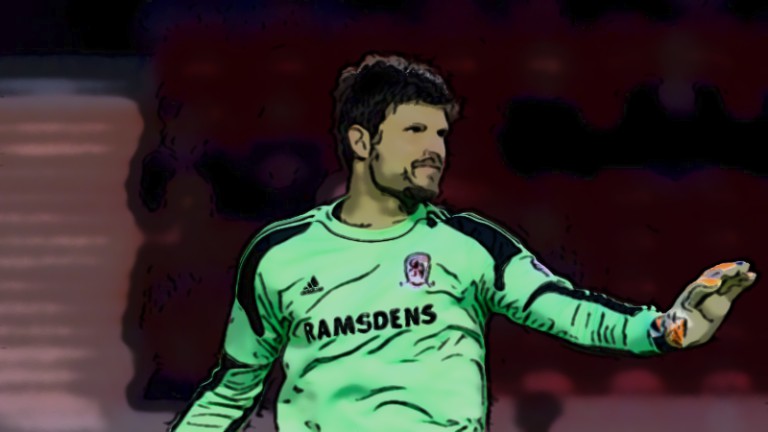 Sean Dyche’s Burnley remain on the shoulder of the leading Championship clubs but have shown signs of pushing on in the second half of the season.

Successive 4-0 wins at Turf Moor in December were followed with a 0-0 stalemate with Ipswich Town and goalkeeper Tom Heaton has now kept three clean sheets in a row at home.

Heaton, who has recently been a fixture in Roy Hodgson’s England international squads as cover for Joe Hart and Jack Butland, has benefited from Dyche reshuffling his back four, moving Ben Mee to centre-back and bringing Stephen Ward into the team, adding defensive solidity.

The Clarets’ success is built on Heaton’s ability between the posts and with nine clean sheets already this season, the Burnley captain is a solid selection for any fantasy football player.

Hull City’s Allan McGregor is another of the top stoppers in the Championship and with the Tigers well-placed for an immediate return to the Premier League the Scot is a good choice for any fantasy football manager.

McGregor has collected 11 clean sheets in 25 matches so far, with Hull just a point behind second-placed Derby County in the race for automatic promotion.

The 33-year-old is also renowned as a penalty expert, which is something to keep in mind for fantasy players looking to squeeze every possible point out of their team selection.

However, Steve Bruce’s side have been going through a patchy spell of form and McGregor has only kept two clean sheets in his last nine appearances.

Kenny Jackett’s Wolves have struggled for consistency all season, but they have been able to rely on two excellent goalkeepers – Emiliano Martinez and Carl Ikeme.

While Martinez tops this season’s WhoScored rankings for Championship goalkeepers with a fantastic rating of 7.21, it is Ikeme who has been in goal for the Midlands club of late.

Ikeme has kept two clean sheets in his last three games and ensured his side recently collected an eye-catching 1-0 win at Brighton with a wonderful late save from point blank range.

Martinez, who is on loan from Arsenal, is expected to return to the side in the next few weeks as he shakes off a troublesome thigh injury, but Ikeme has proved himself more than capable with five clean sheets already.

Since Paul Lambert took over at Ewood Park, Rovers have looked a lot more solid at the back and only five goals have been scored in the Lancashire side’s last six league matches.

Steele kept three clean sheets in a row shortly after the arrival of former Aston Villa boss Lambert, but Rovers will need to arrest a worrying run of three successive 1-0 defeats if they are to give themselves a chance of climbing out of the bottom half and finishing in the top six.