The Rise and Fall of Gareth Bale

Following recent criticism and mounting speculation surrounding Gareth Bale’s future, stats released by Opta-powered fantasy football game www.oulala.com have revealed that the Welshman has suffered a dramatic drop in six key areas since his move from Tottenham to Real Madrid in 2013.

Real Madrid were expecting bigger and better things from Bale after his excellent final season in the Premier League. However, since the move, the 25-year-old has failed to live up to expectations and has shown no significant signs of improvement.

Detailed analysis has shown that Bale’s productivity has dropped during his time in Spain. 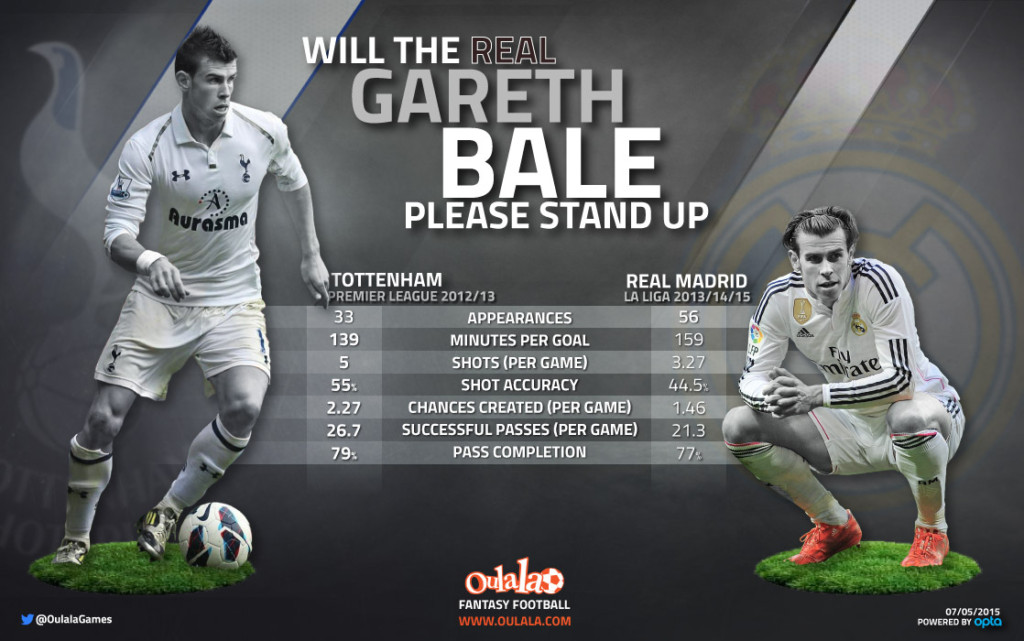 Bale has been far less clinical at Madrid. He has taken 159 minutes to score each of his goals in La Liga since 2013 compared to 139 minutes in the Premier League at Spurs. His shot accuracy has also dropped from 55% at Tottenham to 44.5% at Madrid. Furthermore, he is enjoying fewer shots per game (3.27 to 5), despite playing in a side that boasts superior players.

Creatively Bale is showing further signs of decline. At Tottenham the winger created an average of 2.27 chances per game which has fallen to 1.46 per game since joining Madrid.

The stats also show that Bale’s passing has been affected too. He is making less passes per game (21.3 to 26.7) and has completed a lower percentage of passes attempted (77% to 79%).

With rumours circulating that Bale’s time in Spain could be coming to an end and speculation linking him to a host of Premier League clubs including Manchester United and Chelsea, could the Premier League be on the brink of welcoming back one of it’s former superstars?