Danny Welbeck is set to return to Arsenal’s squad after being out of action for two weeks following a knee injury. The Gunners go head to head with Manchester United at Old Trafford on Sunday in a race for automatic Champions League qualification.

Opta-powered fantasy football game www.oulala.com have analysed Welbeck’s stats from both last season at Manchester United and this season at Arsenal and, on the surface, it appears that the striker’s return will benefit his old club more than it will his new.

The 24-year-old has played 25 Premier League games for Arsenal this season, the same amount of appearances in the league as he clocked up last season for Manchester United. 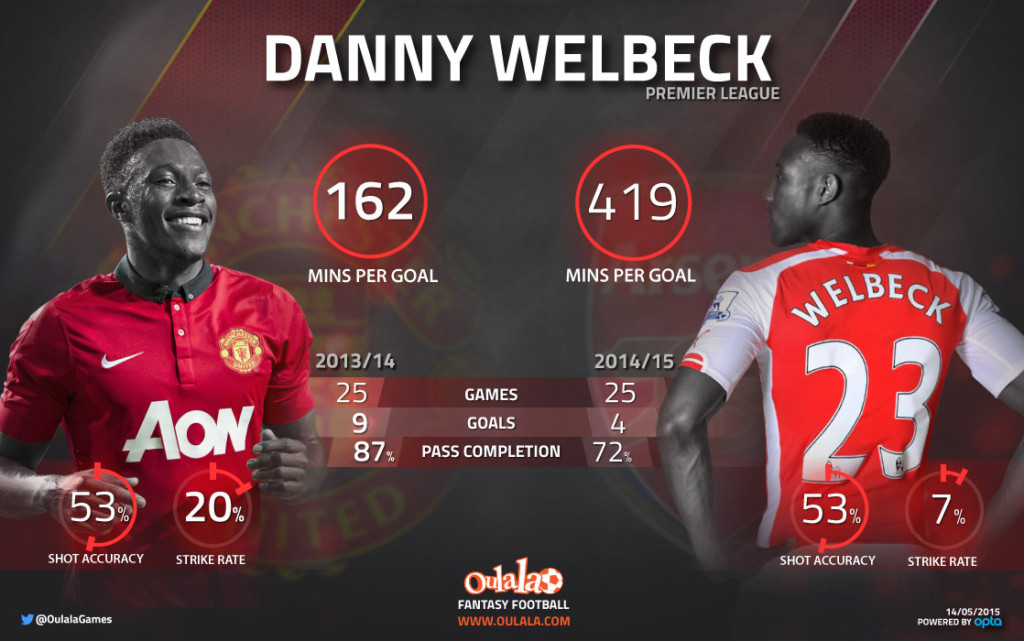 However, Welbeck has only managed 4 goals this term, a rate of a goal every 419 minutes. In comparison, his 9 goals last season took him 162 minutes to net each one. A big drop from a forward that was already carrying a stigma of not scoring enough goals.

Furthermore, Welbeck’s 9 goals in the Premier League for Manchester United last season came from just 46 shots, a more than respectable strike-rate of 20%. Since his move to Arsenal that has fallen dramatically to a strike-rate of just 7% after his 4 goals have come from a total of 58 shots.

Welbeck’s shot accuracy has not been affected since his move last summer, 53% for both United and Arsenal. But the forward’s passing has taken a dip. Welbeck has gone from an excellent 87% pass completion last season at Manchester United to an unimpressive 72% during his time at Arsenal.

Despite scoring the winner in Arsenal’s 2-1 victory at Old Trafford in the FA Cup in March, the stats suggest that Manchester United have nothing to fear from their ex-player as they look to leap-frog Arsenal in their bid to qualify for the Champions League automatically.