Real Madrid will be overwhelming favourites for this tie, although Zinedine Zidane’s side cannot afford to underestimate Wolfsburg in what will be the first ever meeting between the two clubs.

Cristiano Ronaldo is the top goalscorer in the history of the competition and the Portugal international has hit a scarcely believable 13 goals in just eight competition appearances already this season, while he has able support in the form of Karim Benzema and the fit-again Gareth Bale, the trio having been dubbed the BBC.

Wolfsburg have done phenomenally well to reach the last eight, given this is only their second Champions League campaign, although it could be argued they have had a kind draw having been paired against Gent in the last round.

While Real should have enough to get through the tie, Wolfsburg will be confident of getting off to a good start as they have won all four of their home games in this season’s Champions League, although they will have to find a way through a Real defence that has kept seven clean sheets from their eight matches in the competition.

This year is the sixth season in a row that Real Madrid have reached the quarter-finals and the 10-time champions will be seeking to join at least one other Spanish club in the last four, with Barcelona and Atlético Madrid meeting in one of the round’s other ties.

Ronaldo and Lionel Messi have broken many records between them over the years and, until recently, they were locked in a battle to be the top goalscorer in Champions League history.

However, Messi is now trailing his great rival as a result of Ronaldo’s amazing group stage, in which he scored brilliant hat-tricks against Malmö and Shakhtar Donetsk. Ronaldo now leads the way with 90 goals from 123 Champions League games and, given his form so far this season, it is not inconceivable that he could even reach 100 this season if Real progress to the final. 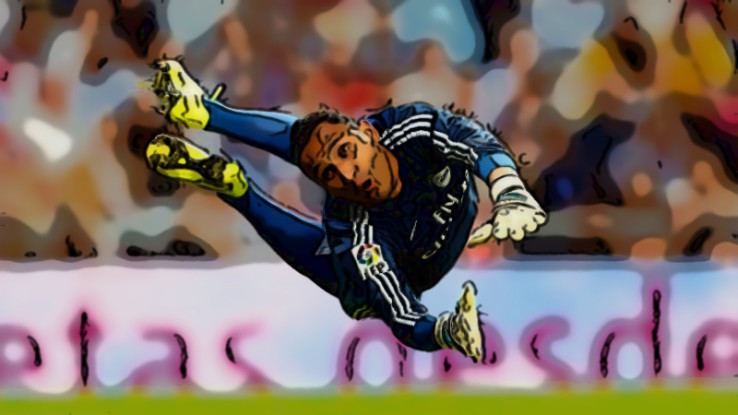 Ronaldo is not the only record-breaker in the Real squad, as underrated goalkeeper Keylor Navas has kept eight clean sheets in his eight Champions League matches. Only Jens Lehmann has gone longer without conceding a goal in the competition, the German reaching 853 minutes before he finally conceded a goal, a record that Navas could well beat in this year’s tournament. The Costa Rican is available at $4,500 on DraftKings UK in their UCL contests.

Real and Barcelona are the only two teams to still be unbeaten in this year’s Champions League.

Ricardo Rodríguez is one of Europe’s outstanding left-backs and, if Wolfsburg are to get through the tie, he will need to be on the top of his game, although the strength of Real’s attack means many daily fantasy football players will not want to select any of the German side’s defenders.

Further forward, there is a fantastic fantasy scoring opportunity in the shape of midfielder Julian Draxler, who has been one of the players of the tournament so far. Draxler has recorded three goals and two assists in the Champions League despite only starting six matches and he can cause problems for Real’s defence, as solid as they have been in the competition all season.

Wolfsburg’s top goalscorer Bas Dost has been injured of late but, if the Dutchman is passed fit for the game, he could be worth a risky pick for players using a contrarian strategy for their teams.

Ronaldo is perhaps the most obvious daily fantasy football selection for Champions League games, with the star’s goalscoring record speaking for itself, but he will use a lot of your budget.

Bale and Benzema could therefore prove to be wise selections, while Brazil international left-back Marcelo loves to get forward from the back. Another defender who comes up trumps in the big moments is Sergio Ramos, while Navas is the obvious goalkeeper to select for this Champions League round as a result of his excellent run of clean sheets in the competition to date.

Toni Kroos has come in for criticism this season but the Germany midfielder has improved since Zidane’s appointment, while the similarly-maligned Isco and James Rodríguez have collected 13 La Liga assists between them this season and could be worthy of daily fantasy football selection.

Record-breaking Keylor Navas is valued at $4,500 on DraftKings (vs Wolfsburg, $50K Budget)

« Will a Pep talk be needed this time ?