The Community Shield focuses on two teams. The Premier League Champions and the FA Cup winners. However, this Sunday’s encounter between Arsenal and Chelsea will undoubtedly be about one man, Petr Cech.

The 33-year-old swapped west London for north London this summer in a £10 million deal at the end of June after playing second fiddle to 23-year-old Thibaut Courtois at Chelsea last season.

Petr Cech is set to come face-to-face with with his ex-teammates and former manager, Jose Mourinho, in this weekend’s Premier League curtain raiser. The Czech international lifted the Community Shield twice during his eleven years at Chelsea in 2005 and 2009.

Mourinho was clearly focused on the future when he recalled Thibaut Courtois from his loan at Atletico Madrid in 2014, putting him straight into the Chelsea first team despite Cech’s excellent 2013/14 campaign. In-turn, this left Cech watching from the bench for the majority of last season.

Of his ex-colleague, Chelsea captain John Terry said “Petr Cech was a model professional last year and that is why he got the move he wanted, because of how well he reacted around the place.”

As the season drew to a close, Cech had to make a choice. Stay at Stamford Bridge as Courtois’ number two or move on, in search of first-team football.

Arsenal have undoubtedly landed themselves a world class goalkeeper in Cech, But how does he compare to the man that Mourinho preferred as his number one?

Opta-powered fantasy football game www.oulala.com have taken a look at Cech’s last full season at Chelsea and compared it to Courtois’ debut season. 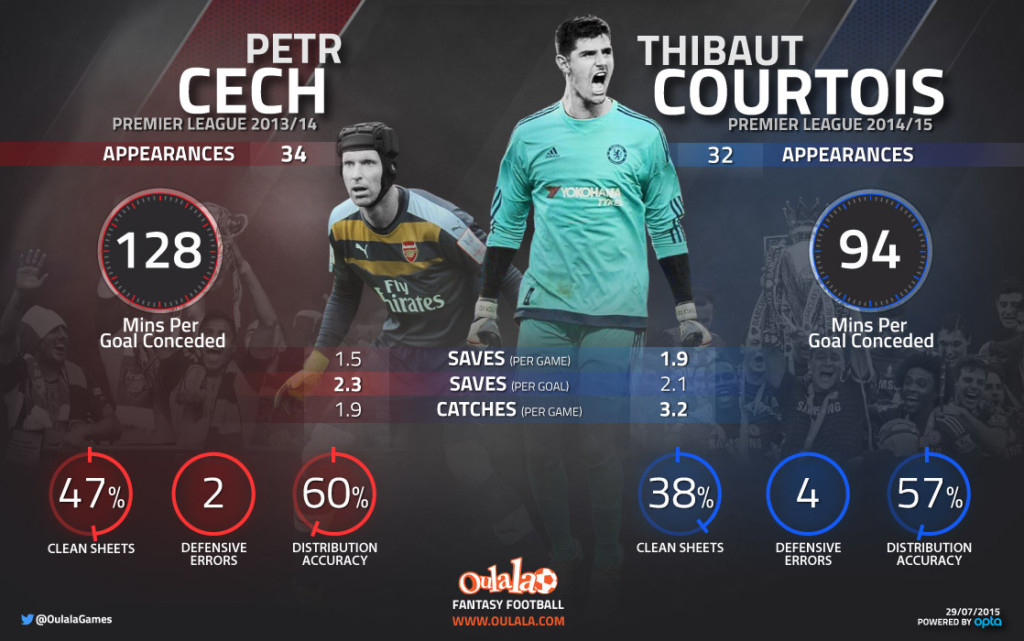 Of the seven key areas analysed, Cech led for five.

Interestingly, the 23-year-old was more error prone, possibly down to his lack of experience in the Premier League. The Belgian made a total of 4 defensive errors last season to 2 from Cech in the previous campaign. The 33-year-old was also more successful when it came to distribution accuracy, narrowly edging Courtois 60% to 57%.

Do the numbers support the claims that Arsene Wenger has finally landed himself a player good enough to help Arsenal’s Premier League title challenge next season?

Will Mourinho come to regret the choice he made in August 2014 when he promoted the younger Courtois at the expense of the experienced Petr Cech?