Cajoling Benitez to save Magpies

Monday night’s Premier League match was the first indication of how Rafa Benítez will try to keep Newcastle United in the Premier League and there were positive signs despite a 1-0 defeat to surprise league leaders Leicester City.

Newcastle were more coherent than they have been all season and, while they did not pose a lot of problems on the attack, their defence was mostly solid and only a stunning bicycle kick from Shinji Okazaki stopped the Magpies from earning a battling point at the King Power Stadium.

Commitment, discipline and aggressive intent were present in spades and if Newcastle can hit those levels for the rest of the season, they will have a chance of staying in the Premier League.

But how will Rafa Benítez be setting up his team?

It might not be the sexy continental-style football many Newcastle fans crave, but for Benítez’s first game he set Newcastle up with two tight banks of four, with a deep back line, denying Leicester the space to play on the counter-attack.

There was good work rate from the attacking players, particularly Aleksandar Mitrović, who managed to keep his combustible temper under wraps for a change. 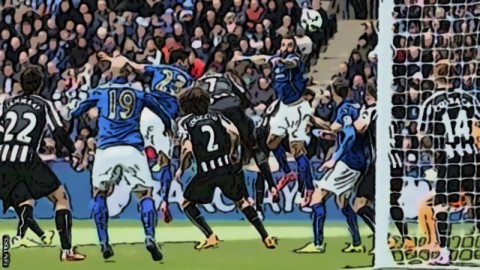 Newcastle looked organised – a basic but important trait they lacked under Steve McClaren – while the compact formation helped the defence to deny Leicester many goalscoring opportunities. In fact, Okazaki’s stunning winner was the only shot on target the league leaders managed all game.

The Foxes were also perhaps fortunate that their goal stood as there were questions about Jamie Vardy possibly being offside in the build-up to Okazaki’s strike.

Newcastle have games against Sunderland, Norwich City and Aston Villa to come, so their fate remains in their own hands even with fixtures fast running out.

One of the many criticisms levelled at McClaren was that he stuck too rigidly to his plan and was unwilling to change Newcastle’s tactics when things were going against his side.

Benítez has a reputation as a tactical tinkerer and that was evident at Leicester. Newcastle looked like they were playing 4-2-3-1 on paper but the two banks of four were always in place when the Magpies were defending.

Benítez made further changes to keep Leicester guessing – throwing on striker Seydou Doumbia for Jonjo Shelvey in the last moments – and his tactical flexibility could be key in the coming weeks.

Under McClaren, Newcastle often looked timid and shrank into themselves when put under pressure and it was easy to draw comparisons between the manager and his team.

Benítez was constantly on the move on Monday night, cajoling his players, encouraging extra effort out of them, offering instructions at every break in play.

The difference between McClaren and Benítez on the touchline could hardly be more pronounced and the Spaniard’s excitement and energy seemed to rub off on his players at Leicester.

There were few clues as to Benítez’s preferred team at the King Power Stadium as some of his most important players – including captain Fabricio Coloccini, best defender Chancel Mbemba and striker Papiss Cissé – were not available.

Andros Townsend, available at 5.5M on FantasyBet for this weekend’s Tyne-Wear derby, was fit only for the bench, so Benítez was shorn of one of Newcastle’s top creative outlets, which hindered their attacking play, although Moussa Sissoko put in his best performance in weeks after being shifted from the right wing to the left flank.

The Tyne-Wear Derby is on Sunday and Benítez will be hoping Coloccini and Townsend are fit to start the game, even if it looks unlikely that Cissé will be ready to return for the match.

Benítez says Newcastle will be taking the rest of the season “one game at a time”, but marginal improvements will not be enough to haul the Magpies away from the bottom three.

« Time running out for ‘Elbows’

Derby day in Manchester and on Tyneside »