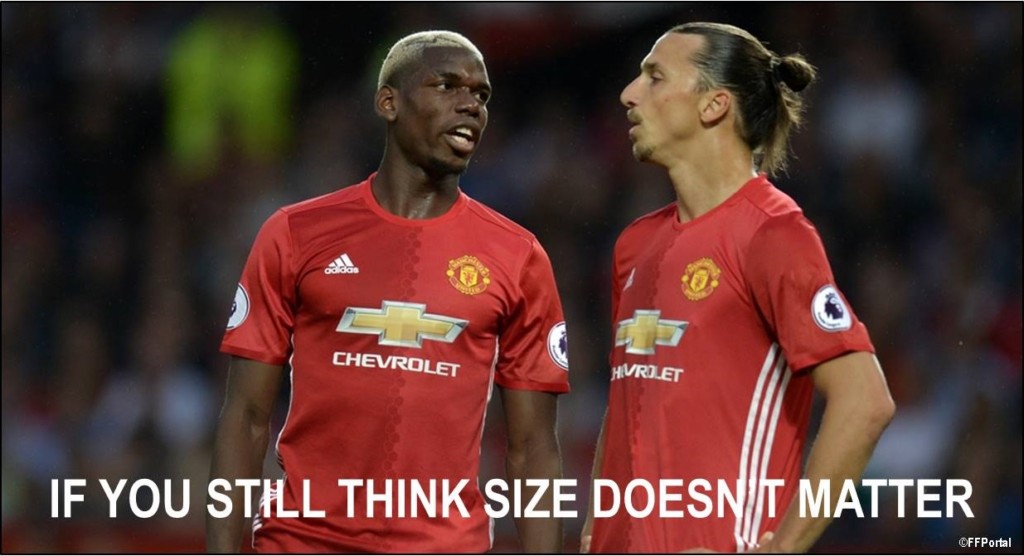 How many headed goals will Man Utd score this season?

Following their 2-0 victory over Southampton on Friday evening, Manchester United left the field to rapturous applause. The highlight of the match had been a thumping header from Zlatan Ibrahimović and it was pretty evident that this United side suddenly poses a serious aerial threat, with the team departing the pitch having an average height of over 6’1” due to the presence of the likes of Paul Pogba, Maroune Fellaini and Chris Smalling. This is not really a surprise, though, bearing in mind that José Mourinho has always had a preference for stacking his teams with tall players but how significant could it be this season?

Early on, in the course of the 2015/16 English Premier League season Talksport conducted a survey which looked at the average height of starting outfield players for each Premier League team. West Bromwich Albion were ranked highest – the Baggies had scored 16 headed goals in the previous campaign, a figure no other side matched, which was made even more remarkable when you consider that they only managed 38 goals in total. That equated to 42% of their goals and helped them to a comfortable 13th place finish, 9 points clear of the drop zone.

In the past four seasons, no Premier League team bettered Chelsea’s total of 18 headed goals, which they managed in the 2012/13 campaign. The Blues also won the 2014/15 Premier League title and it was perhaps, therefore, no surprise, given Mourinho’s penchant for fielding physically imposing players, to see them lining up with the tallest team on the opening weekend of that successful campaign.

Louis van Gaal’s Manchester United side was heavily criticised last season for it’s lack of goals – they scored just 49 league goals – a statistic that wasn’t good enough to help them to secure Champions League football and would ultimately cost the Dutchman his job. Perhaps equally alarming was the fact that only 5 of these goals came from headers.

Which team scores the most headed goals?

Since 2008, Real Madrid and Athletic Bilbao rank highest for headed goals across Europe’s top 5 leagues. It’s perhaps no surprise to see Madrid topping the table, given the number of goals they score in general, so this makes Los Leones achievements somewhat remarkable.

Real Madrid scored 23 and 24 headed goals respectively in their last two La Liga campaigns, with Cristiano Ronaldo and Gareth Bale being the main contributors, while Bilbao nodded home an impressive 26 of the 67 goals they accumulated during the 2014/15 season.

‘Top Trumps’ is not a game for Arsene Wenger

One interesting analogy would be Arsene Wenger and José Mourinho each holding a pack of ‘Top Trumps’ when assessing their summer transfer targets. Which metric would they look at first? For Wenger, it would probably be ‘passes completed’, while Mourinho may well choose ‘height’. Both managers have a stubbornness about them but only one is a serial winner.

Wenger hasn’t won a league title since 2004 – Mourinho has secured 3 Premier League titles, 2 Scudettos and the La Liga trophy in that time.

It’s a touch ironic that the player who has scored the most Premier League headers since the start of the 2012/13 happens to be on Arsenal’s books, with Jonathan Wilson’s WhoScored article, showing that Olivier Giroud has converted a total of 19 headed goals in that time period. The French striker also happens to be the Gunners tallest outfield player.

Will Man Utd’s aerial dominance be significant in the 2016/17 title race?

Arsenal and Liverpool have already had their vulnerabilities exposed and the title race is less than two weeks old. It could quickly develop into a two-horse race between the two Manchester clubs, although it is a bit early to rule out the chances of Chelsea and Tottenham Hotspur.

The two Manchester giants will meet in Gameweek 4 at Old Trafford. The managers have plenty of history and it could be an explosive affair, with Pep Guardiola’s City side almost certain to try to impose their possession-based football on their opponents, while Mourinho is likely to go for a more physical approach.

It’s sure to be a tight affair and don’t be too shocked if it is settled by a headed goal from a set-piece!

The prospect of United scoring a high proportion of their goals from headers should catch the attention of all fantasy football managers. The key question that needs to be addressed, though, is who will be supplying the ammunition? Assists are a vital component in fantasy football scoring that should never be under-estimated.

The Red Devils have won 6 corners in their opening two fixtures. Juan Mata has taken four, while Wayne Rooney has chipped in with two. However, neither player has impressed so far, with the quality of his deliveries.

Henrikh Mkhitaryan is waiting in the wings – if the Armenian establishes himself as a starter, he could quickly lock-in set-piece duties – if he does, you can expect some big fantasy scores to follow suit!

Two of the five goals Man Utd have scored to date in the 2016/17 Premier League season have been headers.

How many will they score in total?