The impenetrable Croat – why it’s Mission Impossible for Arsenal

Arsenal will need to score at least three goals tonight to have any chance of making it through to the quarter-finals of the Champions League, and against a goalkeeper that is making the world’s best look decidedly ordinary.

Opta-powered fantasy football game www.oulala.com have taken a look at Monaco’s number one, Danijel Subasic, the goalkeeper that has conceded the fewest goals in the Champions League this season. Tonight Olivier Giroud, Alexis Sanchez and Danny Welbeck have the almost impossible task of putting three past him, one more than he has conceded in all seven of his European appearances this term. 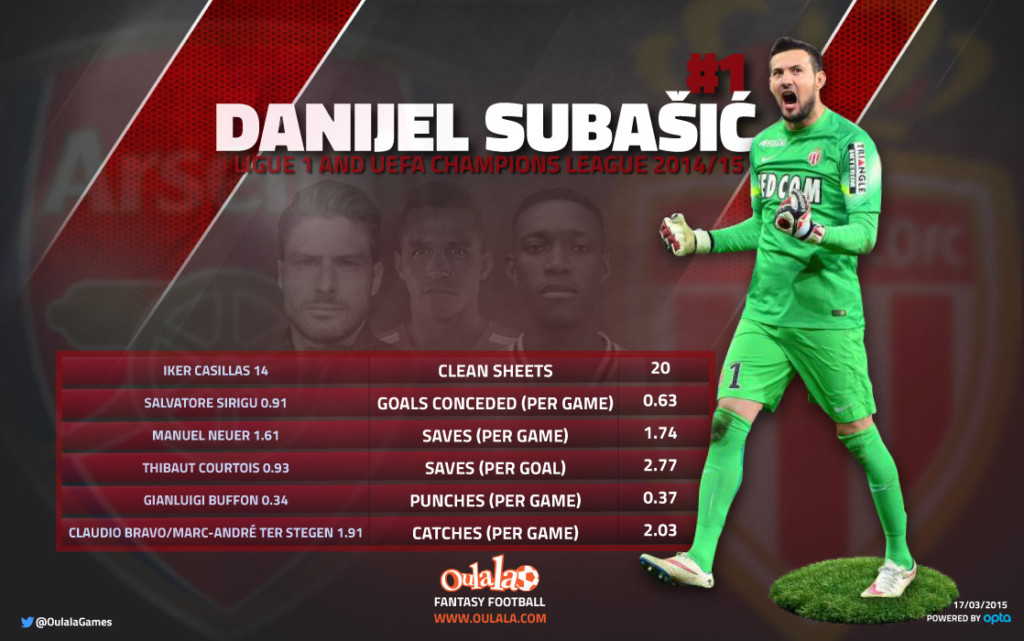 After comparing the shot stopper’s domestic and Champions League form this term against the keepers considered the world’s best, the 30-year-old holds his own in every key area.

Iker Casillas hasn’t enjoyed his best campaign this season. In his 30 appearances in La Liga and Europe, Real Madrid’s number one has kept a total of 14 clean sheets, 6 less than Subasic has in his 35 appearances. The Croat has also conceded fewer goals per game than Ligue 1 rival Salvatore Sirigu of Paris Saint-Germain both domestically and in the Champions League (0.62 to 0.91).

Veteran goalkeeper Gianluigi Buffon is still widely considered one of the best in the world and has enjoyed another great season with Juventus this season, however the 37-year-old has made fewer punches per game in Serie A and Europe than Subasic has (0.34 to 0.37).

Barcelona goalkeepers Claudio Bravo and Marc-Andre ter Stegen has shared their La Liga and Champions League duties this term but combined the keepers have accumulated fewer catches per game than Subasic (1.91 to 2.03).

There’s no doubt that Arsenal face an almost impossible task this evening. Can they do the unthinkable and continue the Premier League’s involvement in the Champions League this season?