The Fox in the Box

England will secure qualification if they win away to San Marino on Saturday and Slovenia fail to win away to Switzerland. A likely scenario.

Captain, Wayne Rooney, has not scored a Premier League goal in 10 games. His last came at the beginning of April last season in a 3-1 win over Aston Villa. The Manchester United striker currently sits just one goal behind Bobby Charlton’s international record of 49 for England, which Rooney is expected to break in the coming days.

Along with Rooney, Tottenham’s Harry Kane and Arsenal’s Theo Walcott are also both yet to score a Premier League goal this season.

Leicester City’s Jamie Vardy has started the new campaign well. The 28-year-old has scored 2 goals in his 4 games and has also provided one assist. 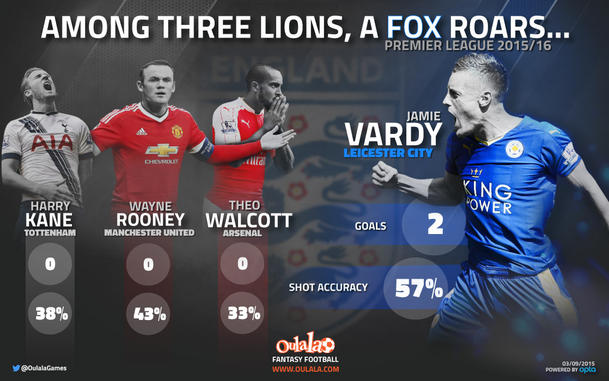 In reality, Kane, Walcott and Vardy are all vying for one spot in the starting lineup, alongside Wayne Rooney. It’s Harry Kane who is expected to line up with Rooney, despite his uninspiring start to the season.

Stats released by Opta-powered fantasy football game www.oulala.com show that Vardy has not only scored more goals on his own than Rooney, Kane and Walcott have between them, but he also leads the other three for shot accuracy too.

57% of the Leicester forward’s shots have been on target this season. In contrast, Rooney has had an accuracy of just 43%. Harry Kane has hit only 38% of his shots on target, with Theo Walcott, just 33%.

Boasting far superior attacking figures, Vardy should walk straight into the starting lineup against San Marino on Saturday, however it’s unlikely, despite Harry Kane’s and Theo Walcott’s poor starts to the season.

Is a game against San Marino just what Harry Kane needs to get his season up and running or is it the perfect opportunity to give the in-form Jamie Vardy the start that he deserves?