How fantasy football players are categorised

At the start of each season fantasy football game operators are tasked with classifying each player in terms of starting position. This will usually be based on a player’s game history and the operator’s interpretation of where he is likely to be fielded.

Spotting players that might be misclassified can be very lucrative and these type of players are sometimes referred to as being out of position (OOP).

Out of Position fantasy football players

The game operators will make mistakes from time to time and intuitive fantasy football managers will tend to spot these errors. Defenders are likely to warrant most attention, due to the potential upside that is associated with them, when they are deployed in more advanced roles.

However, some players will actually play further back. Take Manchester United’s Daley Blind, for example. The Dutchman was classed as a midfielder on a number of fantasy football games in 2015/16 but ended up playing the majority of the campaign at centre-back. That trend has continued but most operators have adjusted his categorisation accordingly for the 2016/17 season, although, the possibility of Jose Mourinho using him in midfield at some point in the current season should not be ruled out.

In fantasy football, scoring systems award points to players for specific actions and these are often tied in with a player’s categorisation. A played listed as a defender might earn 7 points for a clean sheet, whereas a midfielder might only earn 5 points when his team records a shut-out. The onus is the fantasy football manager to assess which players may fare better (or worse) in terms of fantasy points when they play out of position.

If you are familiar with the DraftKings UK product, you will know that they offer an 8-a-side fantasy football format, where managers must select 1 goalkeeper, 2 defenders, 2 midfielders, 2 forwards and a utility pick, who can occupy any outfield position. They have recently made a small adjustment to their rules, with the player list now showing a selection of players that are classified as either a midfielder or a forward (M/F) as opposed to a straightforward midfielder (M) or forward (F).

This means managers are now able to select up to 5 midfielders or even 5 forwards, so long as they stay within the budget constraints. Such flexibility means it is now feasible to go for a 2-5-0 or a 2-0-5 outfield formation.

We can understand the thinking behind this change due to the increasing popularity of more advanced playing tactics and more specifically the in-vogue False 9 position, where the forward tends to drop deep, dragging defenders out of position, rather than playing as the traditional static centre-forward that leads the line.

However, it would be interesting to hear how DraftKings go about selecting these multi-functional types, since a number of wide players are also included in their list.

We’ve taken a look at this weekend’s EPL $28K Golazo contest that has a top prize of $5,000 for the manager who comes out on top, with a view to submitting a line-up containing the maximum number of permitted forwards. 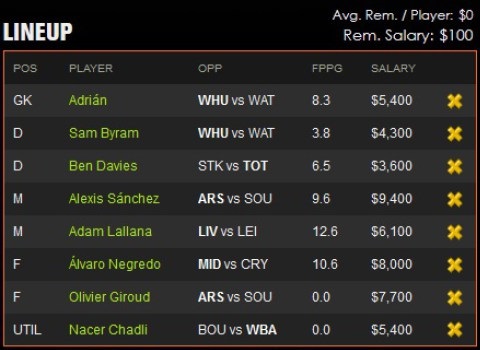 The entry fee for this DrafKings UK contest is just $3 and all managers that place in the top 2,420 places will make a profit. New customers can also take advantage of the four free entries they will receive, to be used on any contest in the lobby, when they make a deposit of £5.

Is multi-fuctional playing positions a good thing for fantasy football or should the False 9 & co be left on the chalkboards?

Let us know what you think!