Liverpool’s rivalry with Manchester United still remains arguably the strongest in English football even though it is 29 long years since the Merseysiders last tasted title success.

So, how did the rivalry between the two clubs begin?

During the 19th century Liverpool was the north of England’s dominant power, with its coastal location making it a vital port for the British Empire.

Some 35 miles away, a plan was being concocted to increase Manchester’s importance to the country’s economy and improve the city’s global reputation.

Links between the city go back as far as the building of the Liverpool and Manchester Railway in 1830, but the Manchester Ship Canal is widely credited with fueling this great rivalry.

Manchester was known for its huge cotton mills, but much of the material had to be brought to the city from Liverpool. Mancunian merchants were unhappy with the amount of money they were spending to bring goods to the city, so it was suggested a new transport method be developed.

Daniel Adamson was the man who put forward the idea of building the Manchester Ship Canal, on which construction began in 1887.

Adamson passed away in 1890 – four years before the Ship Canal was fully operational – but his idea was to change the face of the north-west for ever.

Once the Ship Canal opened, Liverpool’s ports were bypassed as ships could travel straight through to Manchester – which resulted in a lot of jobs being lost on Merseyside, sowing the original seeds for the rivalry we know today.

Fast forward and in the 21st century, both cities are thriving and compete for tourism – the mass unemployment and social problems of the 1970s and 1980s forgotten – but the rivalry lives on.

The fight between Liverpool and Manchester to be the north’s most important city also extends to culture, with residents of each location insisting their hometown has had the most musical impact.

Liverpool dominated this area during the Swinging Sixties when acts such as Gerry and the Pacemakers and Cilla Black sold a huge number of records. The world’s biggest band at the time, The Beatles, also hailed from Liverpool, along with groups such as The Searchers.

By the late 1970s and throughout the 1980s, Manchester was on the rise and its Madchester scene dominated the cultural zeitgeist in a way that Liverpool had never really managed, while bands such as The Smiths and Joy Division were beloved by indie kids.

Manchester was on top throughout the 1990s too, when bands like The Stone Roses and Oasis were among the biggest acts in the world – although for many Oasis were a rip-off of The Beatles.

Oasis were arguably the last great band either Manchester or Liverpool produced, but by the end of the 20th century the rivalry between the cities was mainly being played out on the football field.

One man stoked the rivalry between Manchester United and Liverpool perhaps more than anyone else – Sir Alex Ferguson.

There was little bad feeling between the clubs until the Glaswegian started to stoke the flames.

Indeed, when United were unable to play a pair of home games at Old Trafford in the early 1970s as a punishment for hooliganism, Liverpool stood in and allowed the fixtures to be held at Anfield.

The clubs have both had extended periods of great history – United’s dominance with the Busby Babes followed by Liverpool’s European glory under Bill Shankly and Bob Paisley, but under Ferguson it was United who would come to be most closely associated with the Premier League era.

United had already won a string of Premier League titles in 2002 when Ferguson famously responded to comments made by Liverpool legend Alan Hansen suggested he was past it.

The 1990s also saw some of the most memorable matches between the two sides, Eric Cantona’s goal settling the 1996 FA Cup final particularly standing the test of time.

Under the leadership of the sweary Scot, United then went on to win their 20th English league title – passing Liverpool’s record of 18.

There is no doubt that Ferguson achieved his ultimate goal.

Despite United usurping Liverpool as the de facto most successful English club of all time, there is still one area where the Reds of Merseyside come out on top and retain bragging rights. 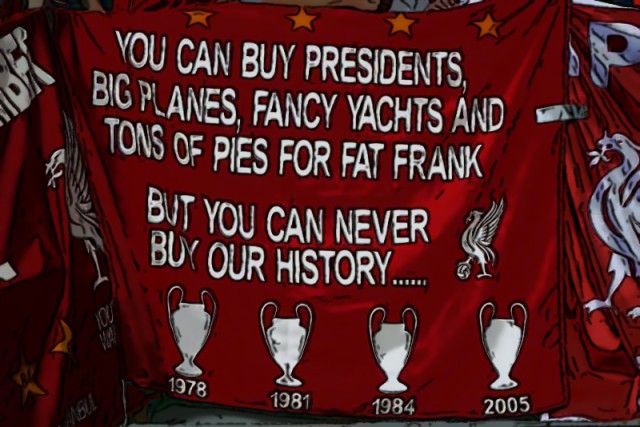 Liverpool have won the European Cup on five occasions – the most recent of which was their Steven Gerrard-inspired triumph in Istanbul against AC Milan in 2005.

United have only won Europe’s premier club competition three times – two of which came during Ferguson’s long reign – although they have also lost finals in 2009 and 2011, both to Barcelona.

In contrast, Liverpool manager Bob Paisley lifted the European Cup three times in just five years – with Liverpool Kings of Europe in 1977, 1978 and 1981 – making him the competition’s joint-most successful manager of all time, tied with Carlo Ancelotti having achieved three winners’ medals.

Sunday’s encounter promises to be a classic.

United have been rejuvenated since Ole Gunnar Solskjær took the reins, even if the Red Devils’ Champions League defeat to PSG highlighted just how far they have fallen behind Europe’s elite.

However, it is not just bragging rights that will be up for grabs on Sunday, so stopping Liverpool from taking another step towards that long-awaited title is all the motivation the home side will need.

This is a clash that should not be missed as these two great rivals go head to head and Jürgen Klopp’s troops will  certainly need to bring their A-game to Old Trafford if they are intent on claiming all 3 points.

« Time for City to turn up the heat?

10 Of The Best FPL Resources »