Nothing Hazardous about Chelsea’s failings

Wilmots went as far as describing Hazard as Belgium’s worst player, despite the 24-year-old scoring the winning goal four minutes from time.

Chelsea manager, Jose Mourinho, has already thrown criticism in Hazard’s direction for his performances in the Premier League this season.

However, stats released by Opta-powered fantasy football game www.oulala.com show that Hazard has in-fact improved in a majority of key areas this term.

The Belgian is still yet to score in the Premier League this season, a total of 360 minutes without a goal. Last season each of his 14 goals came every 241 minutes. 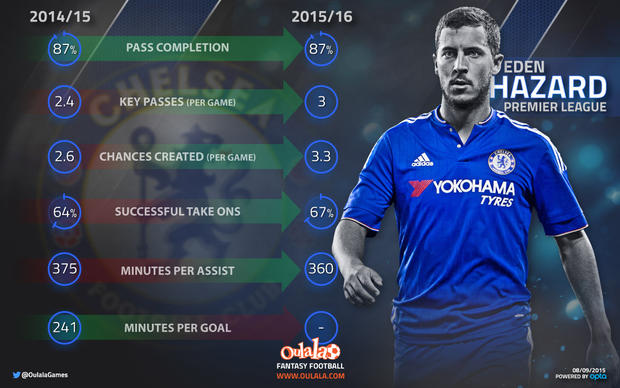 Hazard’s pass completion is equal to last season’s at 87%.

Creatively, Hazard has produced much more this season. He has made more key passes per game (3 to 2.4) and created more chances per game (3.3 to 2.6), compared to last season.

With one assist in his four games this season, he has cut 15 minutes from last season’s 375 minutes for each of his 9 assists.

Even Hazard’s most notable strength, dribbling, has improved. The 24-year-old has successfully completed 67% of his attempted take-ons this season, compared to a 64% success-rate last season.

Is the criticism that Hazard has faced fully justified? Or is this just another case of the star player being made scapegoat when the whole team fails to deliver?