Missing Person to silence the ‘droughters’

It followed a 0-0 draw after extra time with Middlesbrough in the League Cup and a goalless encounter with Manchester City at Old Trafford in the Premier League.

Anthony Martial was the last United player to find the net, during the 1-1 away draw with CSKA Moscow in the Champions League. A goal which now extends to 325 minutes of football since Manchester United last scored.

Manager Louis van Gaal has voiced his concern over the lack of goals but has defended his decision to move Anthony Martial to the left wing, with Wayne Rooney now leading the attack as centre-forward.

Fantasy football game www.oulala.com have studied Rooney’s key stats this season and compared them to his figures from his previous three campaigns. 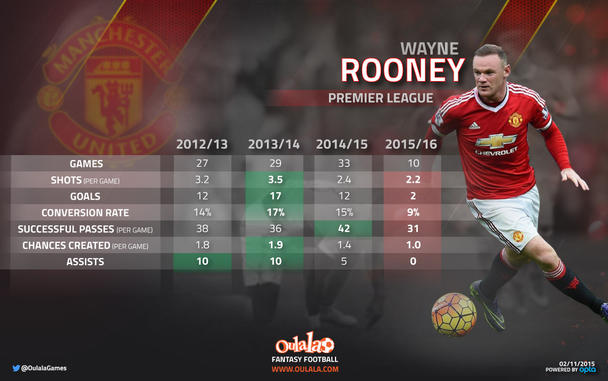 Oulala’s stats show that Rooney’s attacking, passing and creativity have all dropped significantly this season.

He is having fewer shots per game (2.2) and his conversion rate (9%) has also fallen.

Rooney is also making less successful passes per game (31), is creating fewer chances per game (1) and is still yet to register an assist this term.

The last time United experienced three goalless draws was in January 2005, The person that ended that barren run? A certain Wayne Rooney.

10 years on, can the United captain put an end to their dry spell again as they welcome CSKA to Old Trafford on Tuesday?