Switzerland look capable of causing a shock or two at this year’s European Championship, although they appear to lack a reliable goalscorer, which could well hold them back.

Albania and Romania look to be mediocre opposition in the group stage, although the Swiss also have to face the hosts of the tournament, France. Die Nati have finished bottom of the group in their last three Euros, but this summer they have a great chance to go much further.

Manager Vladimir Petković has overseen three successive friendly defeats so expectations among the Switzerland support have been substantially reduced, although the likes of Xherdan Shaqiri and new Arsenal signing Granit Xhaka certainly have the talent to light up the finals.

Euro 2016 also throws up the intriguing prospect of Xhaka lining up against his brother Taulant, who represents Albania. The two teams meet in their opening game, on June 11, in Lens and if both Xhakas are selected it will be the first time in European Championship history that brothers have played against each other at the event, although Taulant is currently carrying an injury.

Petković switched formation and tactics more often than perhaps any other manager throughout the qualification process, but he seems to have decided Switzerland are at their best in a 4-3-3.

Xhaka provides the platform for the midfield, sitting deep and protecting the defence, while Shaqiri nominally starts on the right side of the front three but with plenty of freedom to drift and roam.

However, the last time Switzerland won a game, a 2-1 victory in Austria in November, they fielded two out-and-out strikers, so it is not out of the question that Petković will change his mind again.

Xhaka and Shaqiri are guaranteed to start, barring injuries in the short time remaining before the big kick-off, but there are places up for grabs all over the Switzerland team, especially in attack. 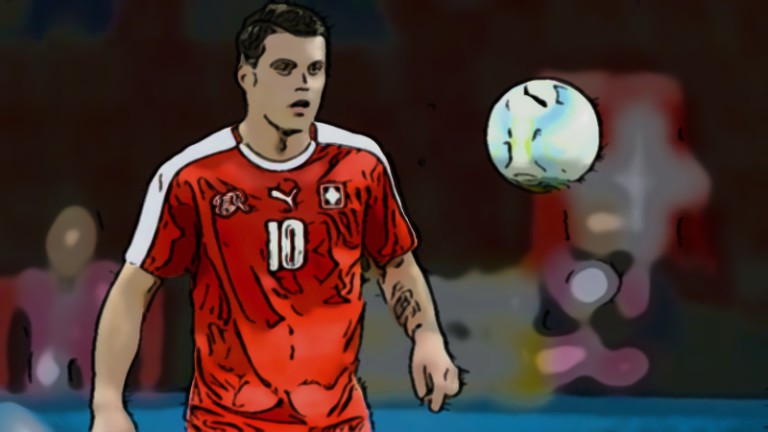 Wolfsburg’s Ricardo Rodríguez is regarded as one of the best left-backs in Europe, but Switzerland’s defence will have an unfamiliar look as neither Philippe Senderos or Timm Klose have been included in the squad.

Switzerland are well-stocked in the goalkeeping department, with a choice of three good goalkeepers who all play their football in Germany’ Bundesliga.

The number one shirt is expected to go to Yann Sommer of Mönchengladbach, who is the most experienced of the trio internationally, although a case could certainly be made for Borussia Dortmund’s Roman Bürki being given the gloves instead.

Augsburg goalkeeper Marwin Hitz is third-choice in the squad, behind Sommer and Bürki.

Rodríguez will start at left-back for Switzerland and he will be asked to get forward and join the attack wherever possible, with right-back Stephan Lichtsteiner (Juventus) the team’s captain.

Fabian Schär of Hoffenheim is likely to be partnered by Hamburg’s Johan Djourou in the injury-enforced absence of regular pick Klose, with Schär particularly dangerous when attacking Switzerland’s set pieces.

Switzerland’s three-man midfield will be anchored by Xhaka, who confirmed his move from Mönchengladbach to Arsenal immediately after the end of the Bundesliga season.

Valon Behrami of Watford and Genoa’s Blerim Dzemaili are most likely to play in front of Xhaka, but there could also be a place in midfield for Gelson Fernandes (Rennes).

Shaqiri is certain to take one of the positions across the front three for Switzerland, but it is less clear who else will be asked to play in attack for Petković’s side.

Admir Mehmedi (Leverkusen) looks favourite to get the nod on the right wing, but the striking role seems to be between Kasımpaşa’s Eren Derdiyok and Haris Seferovic, who plays for Frankfurt.

Many Swiss fans would prefer to see young talent Breel Embolo given a chance up front after he hit 13 goals in a breakthrough season for Basel, but the 19-year-old is carrying a knee ligament injury and may need to build up his fitness levels as the tournament progresses.

Cameroon-born Embolo is expected to start on the Switzerland bench and he looks to be the most likely game-changing option in Petković’s reserves, while Shani Tarashaj (Grasshoppers) is the fourth striker included in the squad, but he has won just two Switzerland caps so far.

Defensive cover is provided by 19-year-old Mönchengladbach central defender Nico Elvedi, who only recently won his first cap, while Toulouse’s François Moubandje and Steve von Bergen of Young Boys are further options for the back line.

In midfield, Fernandes is the senior cover for Dzemaili and Behrami, with Fabian Frei (Mainz) and Denis Zakaria (Young Boys) having collected just eight caps between them to date.

Stoke City playmaker Shaqiri is the top goalscorer in the squad, with 17 goals from his 51 caps to date, and he is the most obvious threat in the Switzerland squad from direct free-kicks. 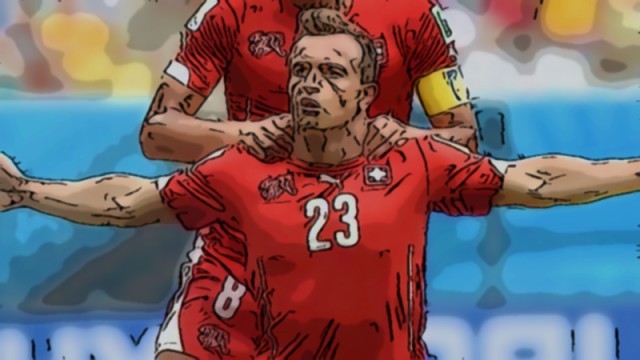 From further out and from corners, finding Schär will be the aim for Switzerland as he has scored five times from just 19 appearances for his country, a terrific record for a centre-back.

Penalties look up for grabs, with Derdiyok and Seferovic each scoring one penalty for their clubs this season, while Djourou and Dzemaili have previously scored spot-kicks for their country.