Ronaldo arrives as opening Round ends

Cristiano Ronaldo has been spending his time sunning himself in tiny shorts since the Champions League final, but when he finally put his kit back on, he bagged a brace, as Portugal defeated Estonia 7-0 in their final warm-up game.

Their Euro 2016 challenge gets underway when Ronaldo and his colleagues take on Iceland in the final match of the opening round of group games on Tuesday, which is Day 5 of the tournament,with Austria and Hungary facing off in the earlier of the two fixtures.

Portugal should cruise through Group F on paper, but Austria and Iceland were two of the most impressive sides throughout the qualifying campaign and they will be out to cause shocks. With the draw looking wide open, Austria and Iceland may be targeting a place in the quarter-finals, while 31-year-old Ronaldo could see Euro 2016 as his best chance of glory with Portugal.

Ronaldo will, as ever, grab all of the media headlines from this section of the draw, but what should you be looking out for if you are selecting fantasy football teams for Day 5 of Euro 2016?

David Alaba looks well set to have a breakout European Championship, with the 23-year-old utility man severely underrated for his club performances with Bayern Munich but a key man for Austria. 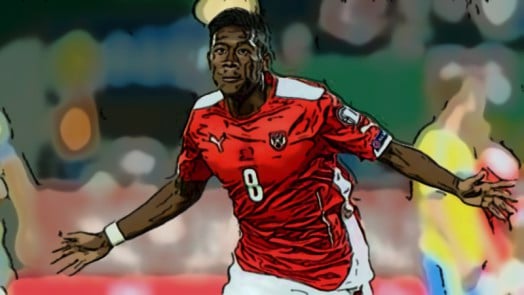 Alaba is already closing in on a half-century of international caps even though he is just 23 and he is likely to play in central midfield throughout Euro 2016, even though he is best known as a full-back. Alaba is a threat with long-range shots and he also takes a lot of his side’s set-pieces, so he could be a fine bargain option for Euro 2016 fantasy football players over the summer.

A regular goalscorer for Austria, Alaba has hit 11 goals for his country at a ratio of around one in every four matches, although he will have to battle with set-piece specialist Zlatko Junuzović for free-kick duties in France. Alaba is firmly pencilled in as Austria’s primary penalty taker, however.

Hungary have qualified for their first major final tournament since the 1986 World Cup, but expectations are low after being handed a tricky group at the finals.

However, Balázs Dzsudzsák is a player with the ability to light up the tournament, with the winger the main creative threat for his national side. Dzsudzsák, who plays his club football with Turkey’s Bursaspor, is also Hungary’s captain and he has scored an impressive 18 goals in his 78 caps.

Furthermore, Dzsudzsák is a major threat from set-pieces, with Hungary scoring over half of their 14 qualifying goals from dead-ball situations. Dzsudzsák hit a gorgeous free-kick in a qualifier against arch rivals Romania, showing he has the mental strength and character for big games.

Careful budget management will be needed to accommodate Cristiano Ronaldo in a fantasy football team this summer, but many players will consider him to be a must-pick in their sides.

The 31-year-old is by far Portugal’s most effective attacker, although there is a danger that they try to play their football through the Real Madrid superstar too much. Portugal have very talented young players – such as the new Bayern Munich signing Renato Sanches – and Ronaldo will have a vital part to play in their development as he comes towards the end of his international career.

Ronaldo is also set to become the most-capped player in the history of the Portuguese national team at the European Championship, as he is currently just two appearances behind the iconic winger Luís Figo, while Ronaldo will monopolise set-piece situations for his side too.

Iceland’s shock success in qualifying was built on the strong foundation of their superb teamwork, but there is no doubting that Gylfi Sigurðsson is the star man in the side, which is led by co-coaches Lars Lagerbäck and Heimir Hallgrímsson, who is a part-time dentist.

The Swansea City midfielder has scored 13 goals from 39 international caps, with the one in three ratio outstanding for a nation that has never been to a major tournament before. Sigurðsson will take set-pieces for Iceland but he is also a threat from open play, scoring six goals in 10 qualifying games, while he recorded 11 goals in the Premier League for his side last season.

Iceland will become the smallest nation in population terms – just 330,000 people live on the island – to feature at a major international tournament, but expectations are high for Sigurðsson and Co.

« Tarantula is no match for Superman