The salary cap or team budget as it is often referred to, relates to the amount of spending power a manager has at his disposal. This will vary from game operator to game operator and your job will be to construct a line-up based on any rules that are in place without going above the threshold. You are under no obligation to spend the full amount but will not be able to submit a line-up if you exceed it. Here’s an example from DraftKings where you are given a budget of $50k.

In this format you must select 11 players made up of 1 goalkeeper, a minimum of 3 defenders, a minimum of 3 midfielders, at least 2 forwards and 2 utility players who can fill any of the outfield positions. You are not required to select any substitutes and the figure above the $50,000 indicates the average amount you have available to spend on each player. Once you add a player, he will appear in the player column, resulting in the outstanding remaining salary being adjusted as well as so that you can see the average expenditure figure available with which to purchase the remainder of your selections.

Now let’s look at an example from FantasyBet where it is mandatory to pick substitutes as part of your line-up and you are allocated a budget of £100m. 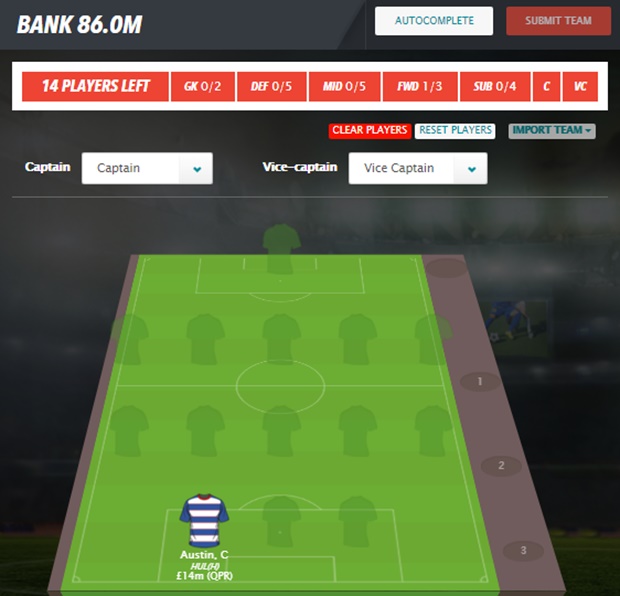 Available funds are displayed in the top left hand corner under ‘Bank’ and in this example Charlie Austin has been purchased (selected) so that he appears on the pitch and the remaining budget now stands at £86m since the player chosen had a valuation of £14m. Shadows indicate positions still to be filled and you will need to nominate 4 substitutes, one of which is a goalkeeper, in addition to 3 outfield players to make up the 15-man squad requirement which will be discussed in more detail under team selection.

The game operator assigns a value to each player based on a combination of factors, one of which is previous form, while some formats have a more dynamic pricing mechanism in place that also takes into account the strength of the opposition for the fixture in question. Players who average the highest number of points per game tend to be priced at the top end of the scale while those with poor output in previous matches will be found in the cheaper bracket.

Your job as the fantasy football manager is to put together a line-up by selecting the stipulated number of players without running out of funds. This is why team news is so important. You need to make sure that you are not spending part of your bank on players that are not available due to injury, suspension or who are unlikely to be chosen for other reasons. Always remember that a player cannot score any points for your team if he is not on the pitch, but don’t worry, we’ll provide you with all the resources you need to make sure you avoid such costly mistakes in both our Advanced and Expert sections.

There is also the ‘No Salary Cap’ approach that a few operators have gone with which means that no budget is allocated and players are not assigned individual valuations. You can select whichever players you want as long as you satisfy any other rules that are in place such as the maximum number that you can select from the same team.

Some operators favour this approach since it speeds the team selection process up somewhat. It might suit you as a player if you are short of time and are looking to join a game close to kick-off, for example.