When you first play fantasy football the rules and the scoring can be somewhat overwhelming. It’s vitally important that you read them thoroughly and carefully. There are a few basic things to look out for when assessing the rules of a particular game.

Are there restrictions on the number of players I can select from the same team?

Some game operators will specify that you cannot select more than say 4 players from one team; other sites may not impose any restrictions at all. This information will be included in the general website rules or within game details for a specific contest. You will find that most sites will prevent you from adding any more players from the same team once you have realised the maximum permitted via a pop-up message when you try exceeding the allowed quota.

What playing formations are permitted?

Some sites will insist on a strict playing formation such as 4-4-2, 4-3-3, 3-5-2; others will give you a degree of flexibility by allowing you to choose flexible formations but imposing minimums on certain position e.g. choose between 3 and 5 defenders.

Do I need to select substitutes and if so how many?

Some operators will insist that you select a number of substitutes; others will give you the flexibility to choose a number of substitutes from within a range; shorter fantasy football formats such as 5 and 6 a-side contests maybe also include options for selecting bench players; some advanced games will allow you to make manual substitutions once a game gets under way; other games will automatically replace any non-starters in your original line-up with players from your bench, subject to playing formation rules being adhered to. This can act as a good form of insurance should you not be online or available to make changes when official team news is announced.

Do I need to nominate a team captain?

Some games will insist on you nominating a captain who will earn ‘double’ points; in other game formats selecting a captain will not be required. Most games that include captains will not allow you to submit your entry until you have selected your captain. This is usually done by clicking the desired player from a drop-down list of the players in your line-up or by ticking a box next to the player’s name. If your captain scores 10 points, for example (7 points for a goal scored, 4 points for an assist, -1 point for a yellow card) this score will be doubled so he will contribute 20 points to your team’s total.

Do I need to nominate a vice-captain?

Some operators will allow you to nominate a vice-captain who will fill in for your selected captain should he not start for whatever reason. Choose your vice-captain by following similar guidelines that you use when selecting your captain.

By what time must entries be submitted?

There may be a cut-off a few minutes before the first game in a particular contest so make sure you are aware of that deadline for any game that you take part in. This varies from operator to operator and may be 10 to 20 minutes before the start of the first fixture in the contest, however, most are much closer to the actual kick-off. Check the game rules of your selected site for clarity and remember that you can also edit your line-ups once official team news is announced which usually filters through 1 hour before kick-off.

Is there a salary cap which I must not exceed?

Most games have a salary cap which you cannot exceed and you must satisfy this condition otherwise your entry will not be eligible; there are a number of games in which a salary cap is not needed meaning that there are no financial limitations relating to which players you can select. When utilising a budget to construct your line-up you will notice that the outstanding expenditure you have remaining to complete your selections is reduced each time you add a player to your line-up.

Each operator will have a scoring system in place that is specific to their particular game. This scoring system will list certain actions that occur during matches and will detail what points will be awarded or deducted each time it happens. Some will be general scoring rules that apply to all players while others will only be relevant to players who are categorised by starting position. That means the starting position assigned to that player by the operator e.g. D. Blind Midfielder. In this case if Blind was to actually play in a midfield role for Manchester United he would still only score points subject to the criteria applicable to defenders. Here’s a snapshot of a typical scoring matrix. 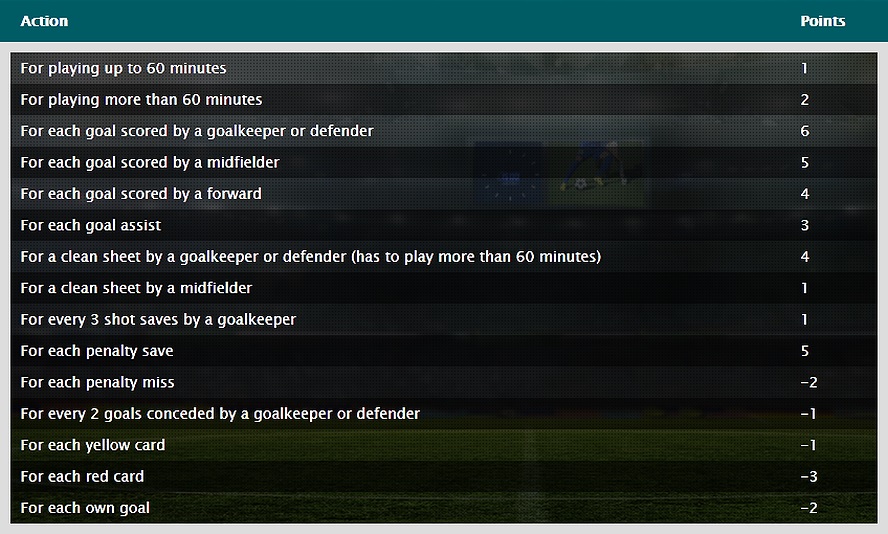 It should also be noted that some operators will award bonus points to the best 3 performing players in each game. These are usually calculated based on a range of statistics relating to each player’s on-field performance but they can be pivotal so should not be under-estimated.

Later on, in ‘Where to play’ we will introduce you to our Playing Guides, a section that will touch on rules and scoring systems for specific games in much finer detail so make sure you reference those as well to help you choose which game to play.