The following Mondogoal case study will provide tips on how to evaluate which daily fantasy football goalkeepers offer the best value as well as providing key selection pointers.

Let’s look at how goalkeepers can earn or forfeit points based on Mondogoal‘s unique scoring system :

In the following table we have categorised these to show the average points per game ranges for the Top 20 Goalkeepers with a minimum number of 10 appearances during the 2014/15 season up to and including week 37:

In the following table, we have ranked the Top 20 Goalkeepers by ‘Saves’. 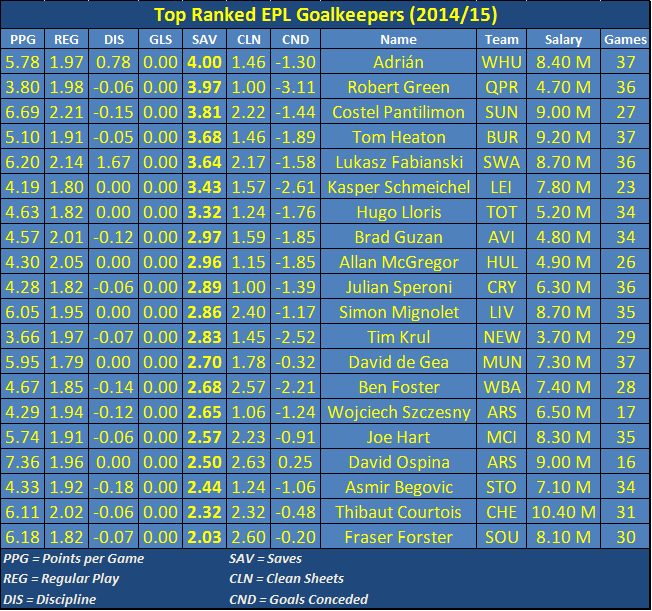 When defence figures are portrayed this way it can be somewhat misleading. So what conclusions can you draw? You can pretty much throw a blanket over them in terms of regular play and discipline but when we look deeper at clean sheets and goals conceded it becomes quite clear that not all goalkeepers are equal.

It’s also worth remembering that a clean sheet is worth 6 points, a single-goal game is effectively worth 1 point and all subsequent goals conceded above 1 will result in 2 points being deducted for each. Arguably one of the best goalkeeping performances of the season was Joe Hart’s performance in the Barcelona v Manchester City Champions League tie. That earned him a Mondogoal score of 13.8 but the margin was fine. Just suppose he didn’t pull off one of those saves resulting in a 2-0 defeat then he would lose 1 point for the save, the 3 point bonus for the 1-goal game and incur 2 more minus points for the extra goal conceded effectively knocking his score down to 7.8. Compare this to Eden Hazard who averaged 13.41 PPG during the EPL season and it becomes difficult to make a case for investing too much of your budget on a keeper.

So the final piece of the jigsaw revolves around value for money. Try to find a keeper that looks capable of scoring more points than his projected PPG based on his salary cap level. Let’s look at the same Top 20 goalkeepers: 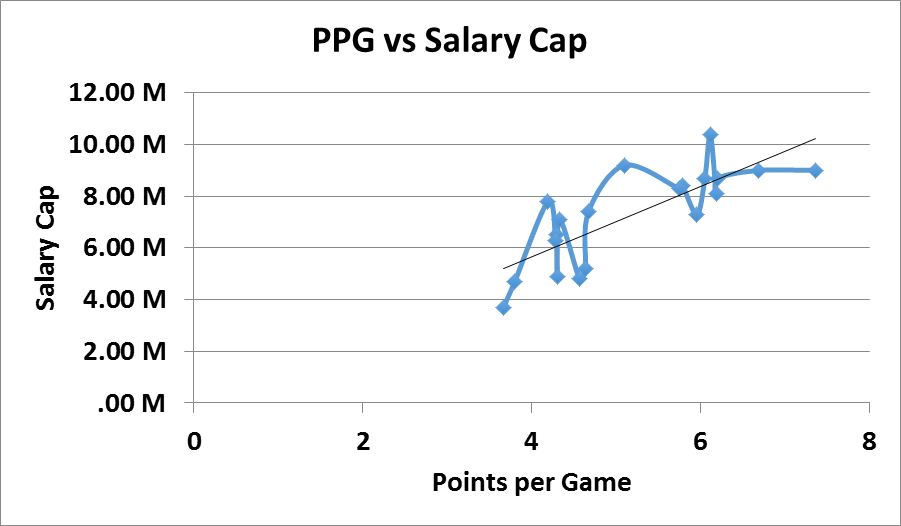 Plotting a best-fit line through this scatter chart gives you an indication of how a goalkeeper should be priced based on his projected points per game. Calculate how many points you think a goalkeeper might earn in a particular match then cross-reference against the salary scale to see if he looks like a value proposition. Mondogoal‘s algorithm indicates that ‘recent form’ is taking quite a lot of precedence when putting a valuation on a player. This means there could be some tremendous value available for the fantasy football manager. You might consider introducing projected shots on target forecasts into your calculations but measuring the exact quality of any given shot on target may prove troublesome.

Our conclusion is that you should look for favourable game conditions. Try to eke out some value by checking the number of goals a team is expected to concede.

How to select your daily fantasy football defenders